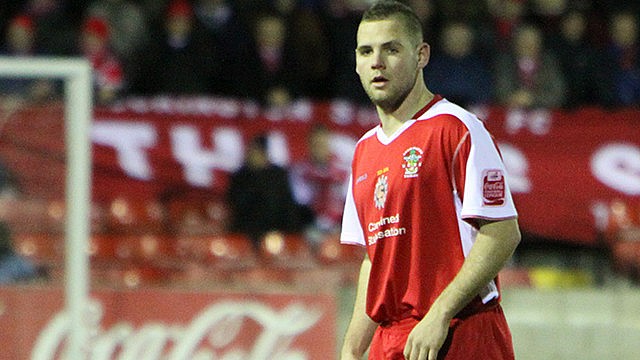 Stanley have added to their attacking ranks, bringing striker Billy Kee back to the Store First Stadium on a free transfer.

The 24-year-old spent a season on loan with the Reds five years ago, making his professional debut and winning a call up to the senior Northern Ireland squad as a result.

Now after time with Torquay United, Burton Albion, Scunthorpe United and Mansfield Town he is returning to Lancashire after signing an initial 12 month contract.

Manager John Coleman is delighted to be bringing Kee back:

“Billy’s a proven goalscorer at this level,” he said. “He didn’t have the best of times last season and I think he’s keen to put that right. He’s a player who suits our style of football and we think he’ll do well for us.

“We’ve always known that he’s a good player. He was only a young kid when he came to us the first time but he already had an eye for goal and he’s one of those lads who you always know what you will be getting when you sign him. He’ll always give it his best shot, he’s a smashing character around the place, he loves football and sums up what we’re trying to achieve here.

“He probably enjoyed his football most with Burton and with us. We’ve got to try to get that back into him.

“He’ll always cause problems for the opposition and that will help us as we want to try and score a lot of goals this season. We’ve got great attacking options now and that’s perhaps an area where we’ve been a little short in the past. It’s a good headache to have with the options available.”

“I had other offers but I turned them down to come here,” revealed Kee. “I’ve had a lot of ups and downs since I left but I think I’ve reached a stage when I just want to be happy and I’m happy at this club. There are a lot of familiar faces here and I think that I can do well for the club over the next year or more.”