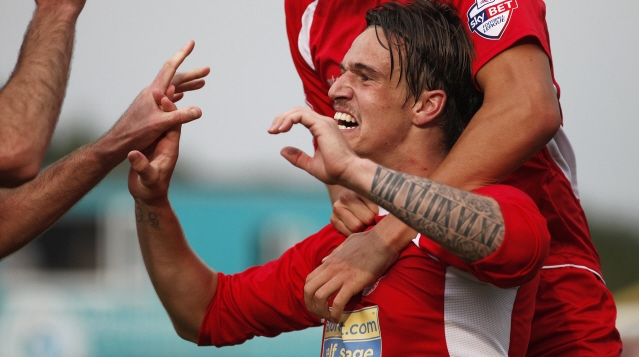 James Gray has left Accrington Stanley after his contract was terminated by mutual consent.

The 23-year-old made just under 80 appearances in three seasons with the Reds, scoring 15 times.

“He’s a smashing kid and a great character, and to be honest I’ll miss him around the place,” said manager John Coleman. “But I’ve been in football long enough, and a goalscorer long enough to know the frustration you get by not starting every week means you can’t score goals. I empathise a lot with him.

“I could have made him sit around and try to demand a huge fee for him, but I don’t think that would have been fair on the player to be honest. He’s done nothing wrong, he’s served the club really well and I wish him all the best wherever he moves to.”

“I can’t thank Accrington Stanley enough for giving me the opportunity to play in the Football League,” added Gray. “I’ve had the best times of my career so far at the club and the club will always be in my heart.

“I’ll miss the backroom staff and people around the club immensely and would like to thank them for how much they have looked after me over the last three years. People like Vikki Gilmartin have really looked after me, mothered me in fact.

“The supporters have always been absolutely brilliant to me and I will miss them a lot. It’s a great club but I have to look forward to the next chapter in my career. Thanks to everyone for everything.”

James Gray leaves the Store First Stadium with the best wishes of everyone at the club.