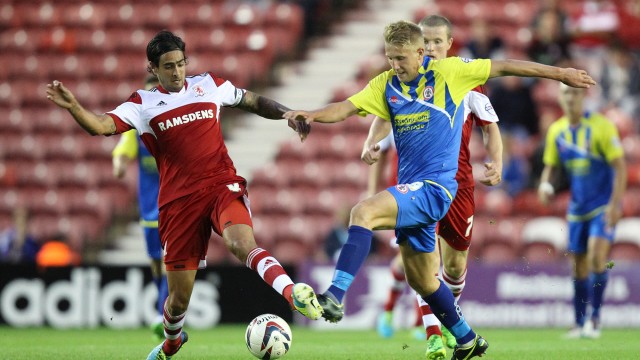 Carver turns coach for the day

It’s not all summer relaxation as Stanley striker Marcus Carver put his coaching talents to the test at a Community Trust’s Football Scholarship session.

Carver, who has just signed a new deal with the Reds for the 2015/16 season, put the new scholars through their paces and was impressed.

Carver, 21, said: “I really enjoyed going from player to coach. There are some talented players there who will begin the full scholarship course in September.

“I like to keep myself busy in the close season and stay active with a bit of coaching. I am looking at doing my UEFA B Licence this year and this is great preparation for it.” 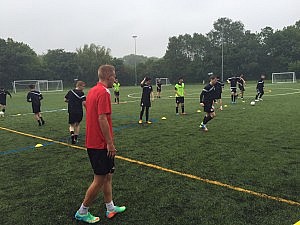 Despite the wet weather it didn’t dampen the spirits of the players as Carver led the way with a passing session followed by some shooting and a small-sided game.

Community Trust Manager Martin Fearon said: “I asked Marcus if he wanted to do some coaching with our new scholars. Marcus lives in the area and attended Norden High School which is the same school that some of our new scholars are leaving this month.

“It is important that we get our first team players involved with the local community and this session is the start of a busy programme of activity planned for next season.” 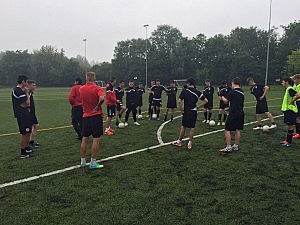 Accrington Stanley Community Trust have been running the Football Education Scholarships for more than three years and will take on their fourth intake in September.

The Scholarship is open to males leaving Year 11 who want to come and study their education and play football for the club.

They will study a BTEC Level 3 in Sport which takes place in the classroom at Accrington Stanley Football Club and is the equivalent to 3 A-Levels.

The practical side involves two outdoor training sessions per week on the new 3G pitch at Hyndburn Leisure Centre as well as two indoor futsal sessions. Matches are played on a Wednesday in both the English Colleges Category 3 league and the Football League Futsal League.

There are a limited amount of places left on the course, if you are interested please go to: http://www.stanleytrust.co.uk/?page_id=200

For more information please contact the Community Trust on 01254 304071 or email info@stanleytrust.co.uk