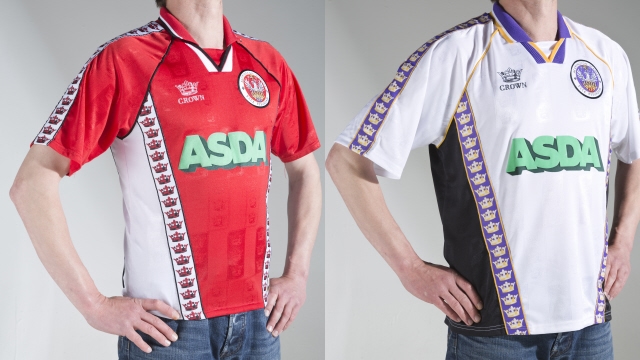 Dyed-in-the-wool Accrington Stanley fans can snap up a piece of club history thanks to a lucky find.

Members of the Official Accrington Stanley Supporters Club (OASCC) recently unearthed a forgotten hoard of home and away shirts, and a limited number of club jackets, all dating from the 1997 season.

The official fan merchandise is all unworn “new old stock” which never went to market, but instead has been in storage for the past 18 years.

When they were brand new you could have worn one while celebrating Tony Blair’s landslide election victory for the Labour Party, witnessing the historic transfer of Britain’s last colony – Hong Kong – to China, or mourning the death of Diana Princess of Wales.

You could even have worn one to watch the first ever episode of Teletubbies with your new baby… and now you can wear one again when your “baby” takes you out for a pint!

Nick Westwell, chairman of the OASCC, said: “We’ve been really lucky to unearth this stash of historic club gear. We have 80 shirts and 20 jackets in various sizes and I’m sure there’ll be a lot of demand from supporters keen to get their hands on them.”

Their chance will come on Saturday June 6th when the OASCC will sell the shirts and jackets from its stall at Accrington Food and Drink Festival, asking just £10 for each item.

The showerproof jackets are black with red sleeves and bear the club badge and the logo of Crown Sports, the club’s sponsor at the time. The away shirts are black and white with blue and gold trim on the collar and emblazoned with the Asda logo, the club’s other 1997 sponsor, as are the iconic red and white home shirts.

To snap one up be sure to visit the OASCC stall at the Accrington Food and Drink Festival, which runs from 9am to 4pm on June 6th in the heart of town – but don’t leave it too late because when they’re gone, they’re gone!

To find out more about the OASCC, visit its stall at the Food Festival or go along to its meetings in the Accrington Stanley Sports Bar on June 18th and July 9th, starting at 7-15pm. For enquiries about the shirts and jackets email: n.westwell@sky.com