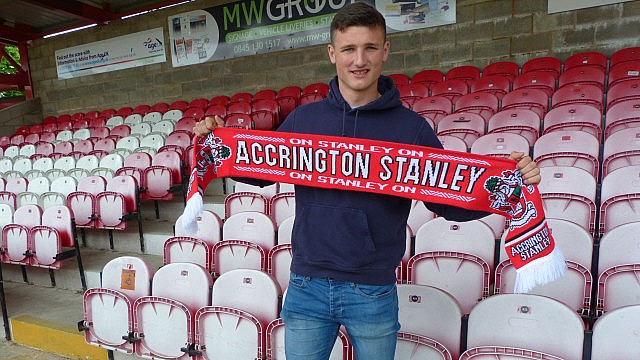 Versatile Matt Pearson is Stanley’s second signing of the summer and he has put pen to paper on a one-year deal.

Matt, 21, was with John Coleman at Rochdale, after starting his career at Blackburn Rovers. He has played at AFC Halifax over the last couple of seasons.

“I was at Blackburn from nine-years-old until I was 18 and then I went to Rochdale with John and Jimmy (Bell),” said Matt.

“Unfortunately they got the sack and I didn’t see anything again and went to Halifax, on loan at first.

“Halifax got promoted to the Conference and I signed a two-year deal and we got to the play-offs the season before last.

“I’ve played every game just about and got around 100 appearances in the Conference. I have also got six goals but I need to improve on that!

Pearson, from Keighley, says he can play in a number of positions.

“It’s nice to know I have signed a contract and I can rest until we return for pre-season. I know of Dean Winnard, he was quite a few years older than me at Blackburn, and I knew he had gone to Accrington.

“I don’t know any other players but I am looking forward to getting to know them all. I can’t wait now.”