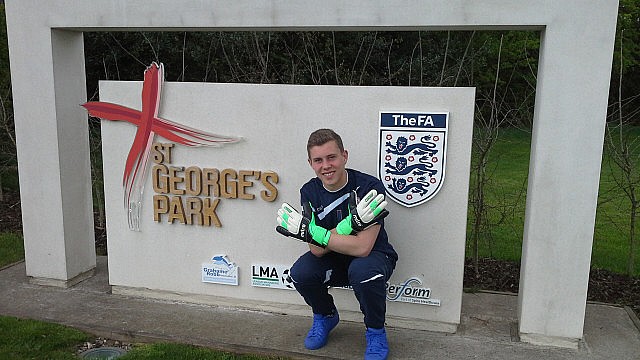 Accrington Stanley youth goalkeeper Jack Little admitted training with England was a ‘surreal experience’ but one he relished.

The 16-year-old, who has featured regularly for the Under 18s this season, was invited to join up with the national set-up for a two-day goalkeepers’ training camp at St George’s Park at the end of April.

He said he was shocked to get the call-up but enjoyed the experience as he mixed it with the best young keepers in the country.

“I got told England scouts were coming to watch me when I was playing for Accrington and I was nervous and excited at the same time,” said Jack, who lives in Burnley.

“The club then got an email inviting me to the England training camp and I had a massive smile on my face.

“It’s a totally different world. It was surreal and everything was so professional. We had our kit laid out, we stayed overnight and the facilities were fantastic. My strengths are my shot-stopping and handling but the England coaches told me how to improve my game. ”

Jack, who goes to Unity College in Burnley, originally started out with the Burnley Academy but was released when he was 12.

“I was gutted to be honest as I was a Burnley fan so it was hard,” said Jack, who also played for Pendle Forest Junior Football Club as a youngster.

However, he came to Stanley on trial, settled in and has progressed through the ranks and switched his allegiance to the Reds.

“It’s great at Accrington, it is a family club, everyone at the Academy is easy to talk to and I enjoy the coaching. It has helped me to develop.”

Despite being younger, he has played for Stanley’s Under 18s this season, as well as Lancashire Under 16s, and this has also helped to make his stronger.

“It is good playing alongside players who are older than me as they talk to me and it will help me become a better player.

As well as his England call-up, his other big dream was to make the bench for the Reds this season.

“It almost happened,” said Jack. “They asked me to be on the bench for Dagenham away in April and it was a huge confidence boost.

“But then, the Saturday before, I cut my ankle playing in an Under 18 match and so I missed out. I was absolutely gutted but I had to pick myself up really quickly as I had to go on the England camp a few days later.

“Hopefully I will get the opportunity next season and I hope to get another England chance as there are four camps throughout the year and they said they would keep an eye on me.”

And he has had a helping hand from a former Stanley keeper. Kenny Arthur designs his own range of gloves and Jack admitted: “I have always worn Kenny’s gloves and then I emailed him to tell him about my England call-up and he sent me my own pair. I felt honoured.”