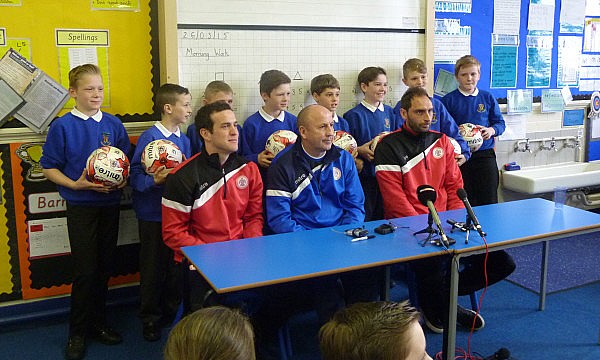 It is less than a week until Huncoat Primary School will be on their way to Wembley Stadium to represent Accrington Stanley Football Club in the Kinder+ Sport Football League Kids Cup League 2 Final against the Southern Regional Winners from Portsmouth.

After making light work of our own Hyndburn district finals and flying through the Regional Finals back in March at the Globe Arena in Morecambe against tough competition from schools across the North, they deservedly won the right to play on the hallowed turf before the League 2 Playoff final kicks off on Saturday 23rd May.

Not only will they get to play on the hallowed pitch, but the squad, their teachers as well as Sport Development Officer Chris Mullen & Community Manager Martin Fearon from the Club’s Community Trust, will be receiving an all-expenses paid trip, travelling down on Friday 22nd May and staying over the night before, a VIP tour of the famous stadium the morning before the game as well as a full Accrington Stanley match kit for them to wear during their final.

As you may already have seen, John Coleman, Nicky Hunt and Luke Joyce paid a visit to the school to wish all the boys well through their special news conference which featured on Granada Reports, BBC North West Tonight and Sky Sports News, a few weeks back, all thanks to Dan Jewell’s network of contacts!

To take them down, Accrington Stanley Community Trust has linked up with Manchester Coach Company Travelmaster, who will be providing a state of the art coach to take the boys and their families down in style. Whilst Dave at Giftprint in Accrington, is providing the boys with customised hoodies to wear down to Wembley and pre-match.

We would like to thank Dan Jewell, John and the players, Travelmaster, Dave at Giftprint, Gareth and Jane at Hyndburn & Ribble Valley School Sport Partnership and most importantly Nicki and Sean at Huncoat for all their help, support and tireless efforts towards making the trip all come together.

Everyone at the Club and Community Trust would like to wish the best of luck to Nicki, Sean and Huncoat for their once in a lifetime weekend! Enjoy every minute and hopefully bring that League 2 Kids Cup Final trophy back to East Lancashire!

If your school fancies their chances of getting to Wembley through next season’s Accrington Stanley Kids Cup or would like any more information please get in contact with the Community Trust on 01254 304071 or email info@stanleytrust.co.uk