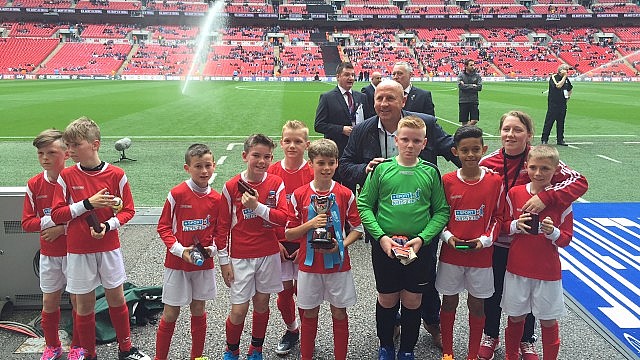 Saturday 23rd May was a day that will live long in the memories of a group of young boys from Huncoat Primary school as they did what some professional footballers fail to do in their whole professional career as they graced the famous turf inside Wembley stadium playing in the Kinder +Sport Football League Kids Cup Final against Portsmouth.

The road to Wembley was not without competition. Huncoat progressed through their local competition to win the final on the pitch at half-time during Stanley’s game against Northampton town. At regional finals the boys topped their group and met Tranmere rovers in the semi-finals. This pulsating match was only decided in the closing seconds with Accrington scoring the only goal of the game. Then it took another late goal against York City in the final to seal their historic place at Wembley.

From the kick off the boys from Huncoat started strong but eventually went a goal down and were 1-0 down at the half to a very strong Portsmouth side. Unfortunately as the game came to a close Portsmouth were able get a second goal and sealed their 2-0 victory.

At the conclusion of the game the boys ascended the famous Wembley steps towards the royal box to collect their runners up medal and trophy which they proudly lifted amongst cheers from the supporters, families and coaches. The day was concluded as the boys stayed on to watch the league 2 playoff final in the comfort of some front row club Wembley seats before making the long journey back to Accrington.

The boys were undoubtedly disappointed to not win the game but the day as a whole was incredible, with some of the boys leaving the day with souvenirs, autographs from the players and one even left with the official match ball from the League 2 Playoff final, however it is without question that they all left the stadium on that Saturday night with a lasting memory that they will never forget.

Accrington Stanley Community Trust would like to thank Travelmaster for providing us with transport, Giftprint for the boys hoodies; John Coleman & Jimmy Bell for making the trip down to watch; the Football League for a wonderfully organised weekend; teachers Nicki Wilcox & Sean Crosier as well as parents and families of the boys for their tireless effort and support in making the trip possible; But most of all, thank you to Ross, Harry, Zak, Rowan, Arran, Dom, Bradley, Matthew & Kanish for representing the club so proudly and for making their own dreams come true.