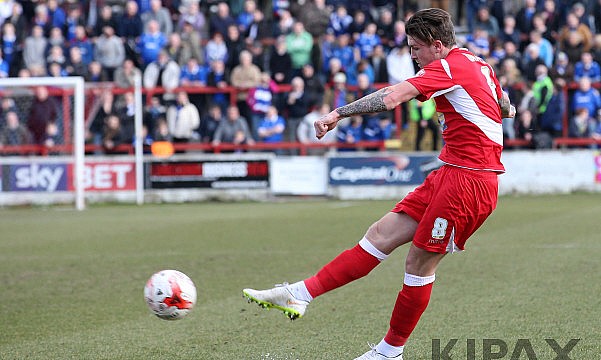 Fifty up for Josh

The 21-year-old suffered two serious injuries when he was a teenager at Huddersfield and didn’t know if he would ever make a professional footballer.

But the midfielder chalked up his 50th starts for the Reds in the final game of the season against Mansfield.

“It’s great to reach that milestone,” said Windass, who has another year left on his Stanley contract.

“I had two aims when I came here – to make my debut by the time I was 19 and I did that against Tranmere.

“The second was to reach 50 appearances and I have done that. It’s a great milestone for me, especially as I did fear I would never play one senior game never mind 50.”

Windass has had a great end to the season, scoring six goals since February.

“When the new manager came in, I was in the side initially but then dropped out and have had to work really hard to get back in again.

“Thankfully I have scored a few goals along the way and I want to improve my goal tally next season.”

Windass is one of the seven Stanley players who is in contract and he is relieved that his immediate future is settled.

“It’s nice having a contract and having the security when others are waiting to hear. It means I can enjoy my summer and come back ready for pre-season with my future settled and see where it takes me.”