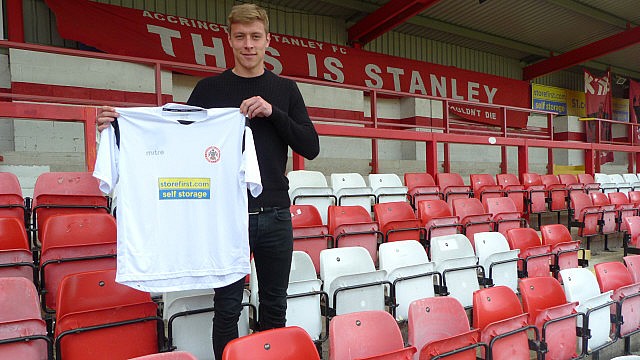 John Coleman has completed his first signing of the summer, with towering defender Tom Davies joining on a free transfer.

The former Fleetwood Town man has penned a one year deal with Stanley after leaving Highbury.

The 23-year-old was one of the hottest prospects in non-league football when he joined the Cod Army from FC United and has also spent time with Alfreton, Lincoln and Southport in the Conference.

He’s delighted to have secured a deal at the Store First Stadium.

“As soon as I heard Accrington was an option and I had the chance to stay in the league it was what I wanted to do,” he explained. “I’m really happy to have signed. The season’s only just finished but I’m already looking forward to next year.

“It didn’t work out for me at Fleetwood for whatever reason but I’ve played a good number of games in the Conference and I now want to be a league footballer. Accrington’s the place where I can achieve that. Speaking with the manager he’s said that’s something I can do here and I’m just excited to get going and get some league football under my belt.”

Tom Davies is the first of a number of signings John Coleman hopes to complete in the coming weeks ahead of the start of pre-season training in July.

A full interview with Tom will be available on the official website tomorrow.