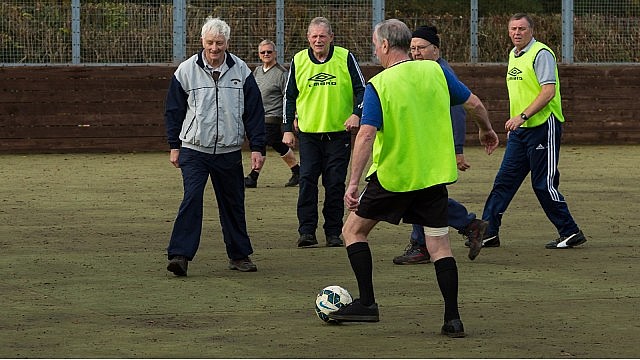 Back in January Accrington Stanley Community Trust began a walking football session for all adults over the age of 50. Walking football is a modified version of the beautiful game, which makes the sport more accessible for those who don’t quite have the speed and agility that they once did.

Designed for both male and females, ‘’walking football has proven to be a great success within the local community” explains Kris Domokos, the Sport Participation Officer within the Community Trust. “It’s great to see the over 50’s slip into a pair of trainers and play football again”.

The sport is very similar to the mainstream game with just a few minor adaptations. The games are played with a size 4 futsal ball which aids ball control and passing, the keepers must throw the ball into play and the game restarts with a kick in  as appose to a throw in.

The sport is played in a small sided game format which enables the players to get more touches, passes and engagement with the ball. After each session a brew and biscuit is included for a social gathering. Consequently there are both physical and social benefits from attending the session.

After a successful trial period we are pleased to announce the permanent delivery of this session!

So lace up those trainers and dig out that Stanley shirt, we look forward to seeing you!