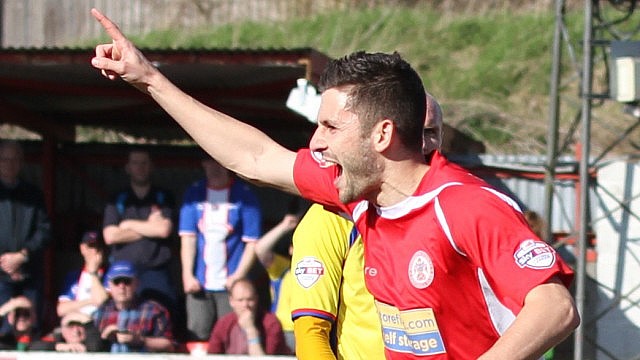 Accrington Stanley ended a run of eight games without a win by beating relegation-threatened Carlisle United 3-1 at the Store First Stadium.

Piero Mingoia set the Reds on their way to victory when he jinked his way through the defence to open the scoring.

Josh Windass coolly volleyed in the second and Seamus Conneely put the seal on a comfortable afternoon for John Coleman’s men. Kyle Dempsey’s goal in stoppage time was little more than a consolation.

The manager made five changes from the 1-1 draw in the Lancashire derby with Morecambe on Good Friday, with two of them enforced as Terry Gornell began a three-match ban following his red card against the Shrimps and Matt Crooks also missed out after picking up a calf injury.

It took 20 minutes for either side to register a threatening effort on goal as Charlie Wyke stabbed wide following a long throw.

In a game severely lacking in quality, the one moment of brilliance in the half brought the opening goal on 25 minutes.

Mingoia collected the ball on the right wing and danced past a couple of half-hearted challenges before poking past Dan Hanford from just inside the penalty area to net his seventh goal of the season.

The visitors looked like a side struggling at the wrong end of the table and were creating few opportunities. Those that did present themselves were long-range efforts – Brad Potts and Kyle Dempsey were both off target from distance.

Carlisle began the second half on the front foot with Mark Beck firing wide when well-placed inside the penalty area and central defender Sean O’Hanlon acrobatically shot into side netting after Danny Grainger’s long throw caused chaos for the Stanley defence.

Dempsey advanced forward and saw a shot deflected into the path of Danny Kearns, who looked certain to level the scores but for a fantastic sliding challenge from Hunt to clear the danger.

The former Bolton full-back was at it again moments later, throwing himself in the way of Wyke’s shot to deflect it wide and preserve Accrington’s slender one-goal lead.

Bruna’s cross from the left wing was perfect for Windass to side-foot the ball into the bottom corner on the volley for his fifth of the campaign.

The lead was stretched even further within two minutes as Conneely poked home his first goal in Accrington colours since joining from Sligo Rovers.

He had only been on the field for five minutes after replacing Gilchrist when Bruna’s corner found the Irishman at the near post and he prodded through the arms of Hanford.

Carlisle were still trying to get back into the game – Potts took aim and let fly from 25 yards but it was a routine catch for the underworked Davies whilst Conneely rolled a shot narrowly wide of the post at the other end.

Naismith whipped a free-kick past the upright as Stanley went in search of a fourth but visitors went up the other end and pulled a goal back in injury time as Dempsey fired into the corner to deny Davies a rare clean sheet.

All in all, it was a good afternoon for the Reds as they won for the first time in nine games to move 11 points clear of the relegation zone with just five games left in the League Two season.