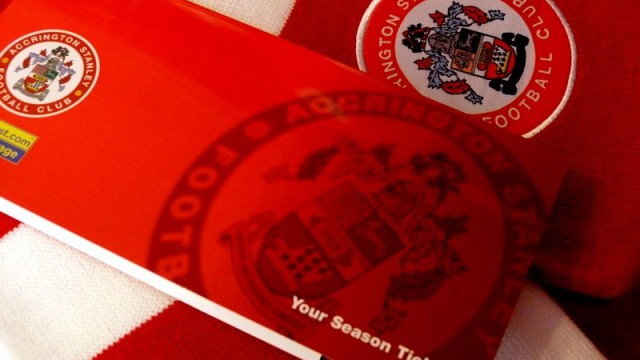 Accrington Stanley are delighted to announce that season ticket prices for 2015/16 will be frozen at 2014/15 levels.

We know that all supporters are different, so whether you choose to sit or stand, behind the goal or in the Jack Barrett Stand, prices are the same across the board.

To mark the Club’s tenth season back in the Football League this is guaranteed to be the cheapest way of watching Stanley in the new campaign and the sooner you sign up, the cheaper it will be, with a slight price increase in May and then in the summer.

To make them even more affordable, April Early Bird season tickets are available for split payment, with only half of the balance paid now. That means you can sign up for an adult ticket for just £100 this month, with the rest payable by 6th August (this excludes £20 under 12’s tickets, which must be paid in full). 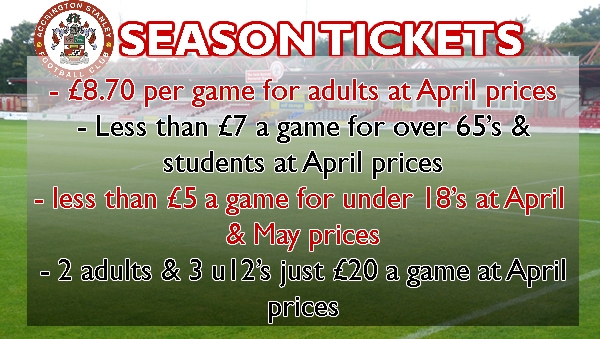 “The Board have taken into account many variables in coming to this decision and hope that our supporters will understand the financial constraints on the Club and take this into consideration.”

“Accrington Stanley would really like to think that in this momentous season, in which we celebrate a decade back in the Football League, we could reach new heights in the sales of season tickets,” said Fans’ Director Joe Cirino.

^all under 12’s must be accompanied by an adult

Application forms can be collected from reception at the Store First Stadium during office hours or you can call 01254 356950 to have one sent out to you.

Payments can only be made via cash, cheque or bank transfer. Please call for more details.