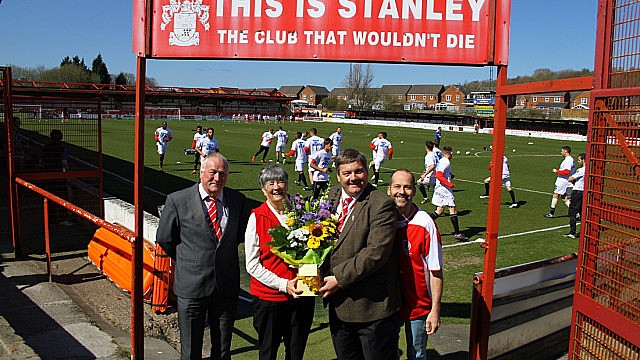 Red Knight Maureen Hurst says she will come and stand with the Stanley Ultras as she aims for a second visit to Accrington next season.

Mrs Hurst, who lives just outside of Bedford, became one of the first Stanley Red Knights when she bought a £1000 package which includes her name on a brick on the club’s soon-to-be-built Wall of Honour.

Mrs Hurst, who is 75 in August, had never been to Accrington but followed their results after her granddaughter Maria Leyland married Accringtonian Andy Leyland and settled in the town.

“My granddaughter moved there and, while I have always enjoyed football, I have never supported a team,” said Mrs Hurst.

“A year ago when Maria moved there I started looking for Accrington Stanley’s results on Final Score and then saw the Red Knight appeal and decided to get involved.

“I did wonder what I had done but then was invited to come to watch a game by the Accrington board – I had never been to a football match before.

“I was picked up and taken to the match against Stevenage and it was a day I will never forget.

“I loved everything about it – the Norwegians were there and they sang at half-time, everyone was so friendly and I loved the Ultras and their drums. Next time I come, I am definitely paying my money and standing with them.

“I thought Accrington were going to win as well until Stevenage scored late on to draw but it didn’t spoil my day. It was a fantastic experience and I have written the club a two-page letter to say so.

“I know they need supporters so have been trying to drum up my friends to follow them as well.

“I even got to see my granddaughter while I was there so it was a really special day for me.”

Each Red Knight will have their name and a short personal message inscribed in a ‘Wall Of Honour’ to be a focal point at the stadium whose location will be decided in consultation with the Official Supporters Club. Interspersed with the bricks will be names of past and present Stanley heroes for which supporters will be given the chance to vote on their inclusion within the Wall.

Click here to find out more about Bumble’s Red Knights