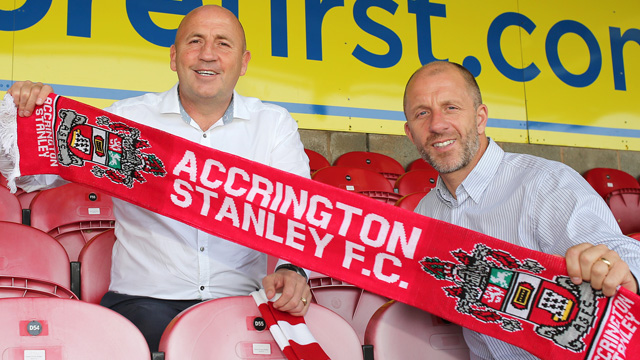 John Coleman admits that the 2011 play-off semi-final defeat to Stevenage still hurts him.

The Reds face Graham Westley’s play-off chasers tomorrow at the Store First Stadium and both managers have had stints elsewhere before returning to the clubs they took from non-league into the Football League.

Stevenage will be looking to cement a top seven spot while Coleman will be hoping for a strong end to the season, build on their four game unbeaten run and put to bed some of the ghosts from four years ago.

“We were derailed early on by Stevenage in the play-off semi-final and that was frustrating,” said Coleman, with his side losing both legs of the tie.

“They came here and did a job on us and I would like to at least rectify that.

“I’d like to think that this time around when we play Stevenage at home we won’t have eight of our players already arranged to go somewhere else. That was one of the big key factors in us losing that.

“I’d like to think we haven’t got eight boxed off for next season. There might be one or two.”

Coleman is frustrated that his side have ended up been embroiled in a relegation battle this season after a promising run in September and November took them towards the play-offs.

“We did hit a tricky spot and were flirting with relegation but we got out of it although I think this group of players have been capable of more,” said Coleman.

“But if you give the goals away as regularly as we have done this season – poor goals – you’re not going to get what you probably think you’re overall general play deserves.

“It’s not like boxing, you don’t win on points in football. It’s not like gymnastics where it’s interpretation of how you look. It’s cold hard facts, and the cold hard facts are the goals against column and goals for column, and we’ve got an horrendous goal difference.

“However we have proved a lot of people wrong again by staying up and we want a strong end to the season now. The priority is still going to be to win every game we play.

“That will be hammered home to the players between now and kick-off on tomorrow and then again for the following week and the week after.”