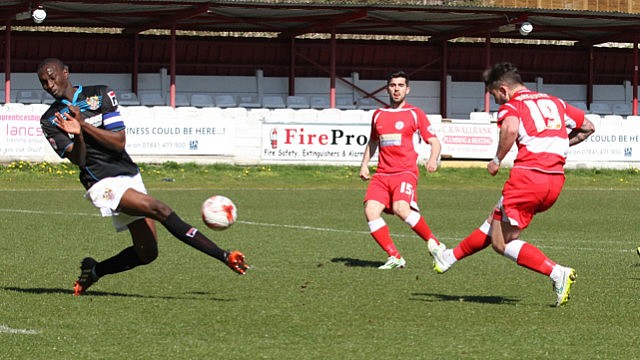 Sean Maguire was proud to celebrate his first league double in front of his family against Stevenage.

The Irishman found the bottom corner of the net for the opener on 15 minutes and then celebrated a 38th minute goal to give Stanley the lead, despite being down to 10 men from the second minute after Nicky Hunt’s dismissal.

But play-off chasing Stevenage came back from the penalty spot with Simon Walton’s 19th minute equaliser and then Chris Beardsley’s last gasp leveller.

“I am happy, a double in a game has been a long time coming for me,” said the West Ham loan striker. “I have always wanted to get a brace or a hat-trick and I haven’t done it since my semi-professional days. 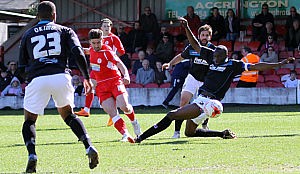 “With Nicky being sent off so early it was always going to a struggle but we showed great character to take the lead twice. We would have settled for a point when Nicky was sent off but, by the end, we were frustrated we didn’t win.

“It was also special for me because all my family were here – my mum, dad and little brother and sister. The last time they came it was Wycombe and I scored then so they are my lucky charms!I just ran over and celebrated in front of them.”

Maguire thanked Josh Windass for setting up his first. 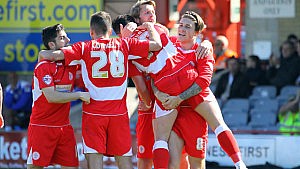 “Josh made a great run, beat his man and I saw that the keeper was on one side and the other side was free so when it came to me, I knew where the ball was going.

“For the second, it was a long throw, Joycey (Luke Joyce) got a little touch on it and again I found the same corner.

“It was beautiful for me – I had a chance to get a hat-trick as well but I will settle for two.”