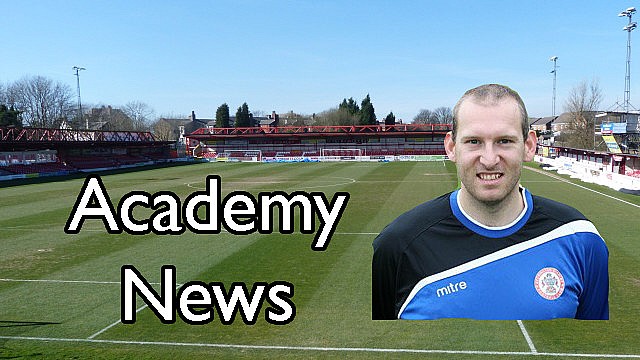 One of Stanley’s Academy goalkeepers has been called up to train with England.

16-year-old Jack Little, who has featured regularly for the under 18’s team this season, will join up with the national setup for a goalkeepers’ training camp on 29th April.

He’ll become the second Stanley Academy product to be involved with England after Connor Mahoney, now of Blackburn Rovers.

“This is fantastic news for Jack and the club,” said Academy Manager John Townson. “Jack’s delighted to be going down to St. George’s Park and we hope he does himself justice, which I’m sure he will. It just further highlights all the good things we are doing as a club, the quality of the coaching and the environment the lads work in.

“The important thing is he enjoys it. He’s a good, calm lad and I think he’ll love being there.

“We were really proud to hear about this call up. Our goalkeeping coach Kev Wolfe deserves a lot of credit for it too. We put Jack into the youth team at 15 and we think that shows the rest of the Academy lads that if you’re good enough you’re old enough. He was given the opportunity and has flourished and I hope that it continues.

“This training camp will show him the standards that are out there. The best goalkeepers in the country will be there and he’ll be able to see where he stands amongst that. He’s obviously in contention. I hope that it drives him on to keep progressing and improving.”

Max Hazeldine, Keenan Quansah and Kealan Steenson have both been training with the first team for the last week and Townson believes it show the quality of player being produced by the club.

“It shows that the Academy has come a long way,” he explained. “There’s a lot of talent in there and I believe that talent is getting coached and nurtured very well.

“The manager himself said he wouldn’t give the three lads pro deals if they weren’t good enough so it suggests that as an Academy the coaching has been to a high standard. I believe there’s a lot more talent to come. The under 16’s that have come into the youth team this season will be much better for the experience and I believe there could be a successful season on the cards next year.”