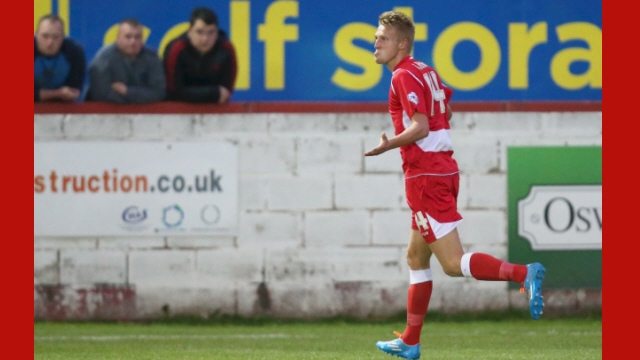 Carver up for ‘Ultimate Finish’

Marcus Carver’s goal against Carlisle in the Johnstone’s Paint Trophy has been shortlisted for the ‘Ultimate Finish’ of the season award.

Carver, now on loan at Barrow, chipped the goalkeeper first time in round one of the competition and is one of ten players up for the award.

Fans can watch the exclusive Ultimate Finish video on the Johnstone’s Paint Trophy website – http://www.johnstonespainttrophy.com/competitions/ultimate-finish-favourite-goal-competition/ – and vote for their favourite effort.

The player with the most votes will claim the Johnstone’s Paint Trophy Ultimate Finish of the Season 2014/15 award, while one lucky fan selected at random from those who voted for the victor will win an Xbox One console, controller and a copy of FIFA 15.

Among the finalists are Korey Smith and Aaron Wilbraham from current Johnstone’s Paint Trophy champions Bristol City, along with Matt Smith, who was on loan with the Robins earlier in the season.

“Every goal on the shortlist is of the highest standard. It’s going to be a very difficult choice for fans to decide where to cast their vote.”