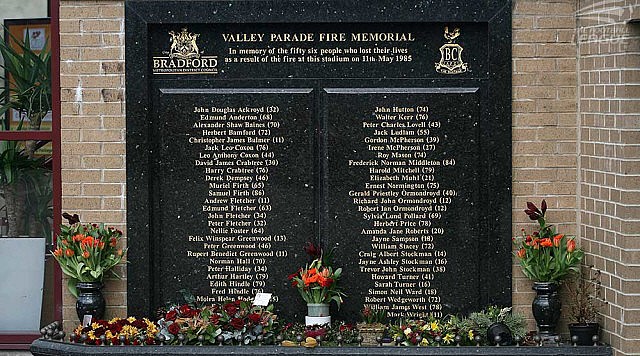 All matches in the Sky Bet Football League taking place this weekend (25th April – 27th April) will be preceded by a minute’s silence to mark the 30th Anniversary of the Bradford Fire Disaster in which 56 supporters lost their lives and hundreds more were injured.

The date coincides with Bradford City’s last home match of the season, when the club traditionally marks the anniversary of the disaster which occurred on 11th May 1985.

Working closely with the Football Association and the Premier League (whose clubs will also hold a minute’s silence), The Football League will be supporting efforts to help raise £300,000 for the Plastic Surgery and Burns Research Unit (PSBRU) at the University of Bradford.

The Football League’s Chief Executive, Shaun Harvey, said: “This period of silence will give fans across the country the opportunity to remember the terrible events that occurred at Valley Parade back in 1985 and, in particular, the supporters of Bradford City and Lincoln City that lost their lives. The disaster’s impact continues to resonate within the Bradford community and within football and we must ensure that the lessons learned from it are never forgotten.”

In addition to the minute’s silence at matches this weekend, the official Commemoration will include a service of civic remembrance in Centenary Square, Bradford, on Monday 11th May.

Mark Lawn, the co-Chairman of Bradford City, said: “I am personally delighted that the FA, The Football League and Premier League have got involved. I would like to remind people that the PSBRU is solely reliant on charitable donations by the public, charitable organisations and businesses, and has no funding from the Government.

“I am extremely pleased that Bradford City has helped to fund the PSBRU through the supporters raising money. This has been enough over the years to help maintain and exceed the standards coming from the Unit.”