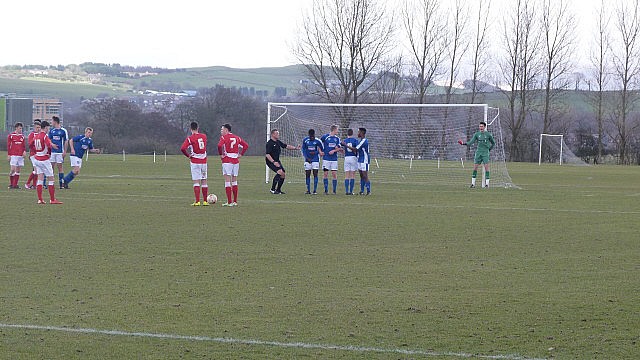 There was late heartbreak for Stanley’s under 18’s as they conceded a last minute goal to lose 2-1 to Oldham and be knocked out of the Youth Alliance Cup.

The young Reds had led the tie 1-0 thanks to a goal from Nathan Webb but two strikes in the last ten minutes send the visitors through to the area final against Wigan.

Stanley arrived at QEGS with five successive wins under their belts and looked to contain a Latics side famed for their attacking prowess in the early stages.

That plan seemed to work, with limited chances in the first 45 minutes. When the visitors did create something, 16-year-old goalkeeper Jack Little was equal to it, with centre backs Dylan Smith and John Roberts putting their bodies on the line for the cause.

At the other end Kealan Steenson drove a free kick into the Oldham wall before Jack Hartley smashed the rebound off target and Roberts couldn’t stretch to head a delivery from Hartley home.

After the interval Stanley raised their game and were soon in front. Smith’s diagonal ball from defence caused problems for the Oldham right back who was outsmarted and outmuscled by Webb, who broke into the box and smashed the opening goal low into the corner of the net.

Now the Oldham keeper found himself with work to do, holding a curling shot from Max Hazeldine, a header from the same player and a close range strike from Smith.

As the game wore on Oldham applied more pressure, with Little forced to turn a shot round the post before a team effort was required to clear the resulting corner.

But eight minutes from time parity was restored when Jamie Stott’s free kick was knocked on inside the box and beat Little to make it 1-1.

With the tie set to go straight to penalties a nervy finish was set up. It could have been more anxious for the visitors had their goalkeeper been sent off for handling outside his box but the referee awarded a yellow card and home appeals for a penalty from the resulting penalty were turned down.

Thoughts must have been turning to spot kicks when the 90th minute arrived but Jack Tuohy had other ideas. The visiting captain nipped in inside the box to round Little and slot home from close range after a spell of pressure.

The final whistle signalled Stanley’s first defeat in six and the end of their cup run but Academy Manager John Townson must have been able to take positives from the performance.