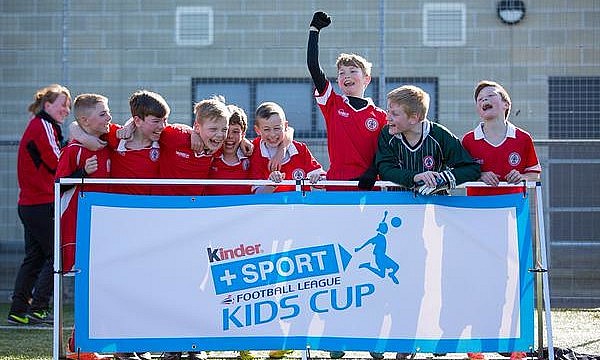 “Que sera sera” for Huncoat at the Regional Finals!

After winning the Accrington Stanley Community Trust Hyndburn district competition towards the tail end of last year, and beating strong competition from the Ribble Valley district winners St Marys Mellor in the local Final at the Storefirst Stadium in January, Huncoat joined schools representing Burton Albion, Hartlepool United, Bury, Mansfield, Carlisle United, Tranmere Rovers, York City, Shrewsbury Town and Morecambe for the chance to win their right to play in the Grand Final against the Southern League 2 Regional winners at Wembley before the League 2 Playoff Final on Saturday 23rd May.

Played at the home of Morecambe FC, the Globe Arena, the boys were drawn in a strong looking group alongside Burton Albion, Shrewsbury Town, Hartlepool United & local rivals Morecambe.

Despite a frustrating 0-0 draw in the opening game against Shrewsbury Town, the boys kicked on with a 1-0 victory over Hartlepool United and a satisfying 3-0 over local rivals Morecambe. Needing a point to make it through the group, they finished in style with a comfortable 2-0 over Burton. The semi-final line-up saw them take on a difficult Tranmere Rovers side. With the game heading for a stalemate and with only one minute on the clock remaining, Huncoat managed a winning goal to reach the final against York City. Despite a tight encounter and strong vocal support from the York contingent, it wasn’t enough as Huncoat deservedly prevailed with a well taken goal 3 minutes from the end to win 1-0.

Sport Development Officer Chris Mullen, who went up to support Huncoat on the day, explains ‘it still doesn’t seem real to Nicki, Sean and myself. I told them a little fib at the start of the day explaining there was another round after this one to get to Wembley so as not to put too much pressure on the boys. I don’t think they realise just how massive this is for Huncoat, the Community Trust and the Football Club. They are the first ever representatives of Accrington Stanley to go, let alone play on the hallowed Wembley turf in the history of the club! They were the best team on the day and to compete and beat the best schools from across the North is an unbelievable achievement. I am immensely proud of each and every one of them. We already can’t wait to come and support you on your big day!”

The squad, teachers and representatives from the community trust will now receive an all-expenses paid trip to Wembley, staying over the night before opposite Wembley, a tour of Wembley stadium, full Accrington Stanley match kit for them to wear on the day along with playing their League 2 Kinder Sport+ Kids Cup Grand Final against the League 2 Southern Regional winners on the hallowed turf before the League 2 Playoff Final.

Huge congratulations go to all the boys as well as teacher Nicki Wilcox and Headteacher Sean Crosier (who both must have a few shorter nails this morning!) We can’t wait to share your big day with you at Wembley on May 23rd!

If your school is interested in taking part in next year’s Accrington Stanley Kids Cup or would like any more information please get in contact with the Community Trust on 01254 304071 or email info@stanleytrust.co.uk