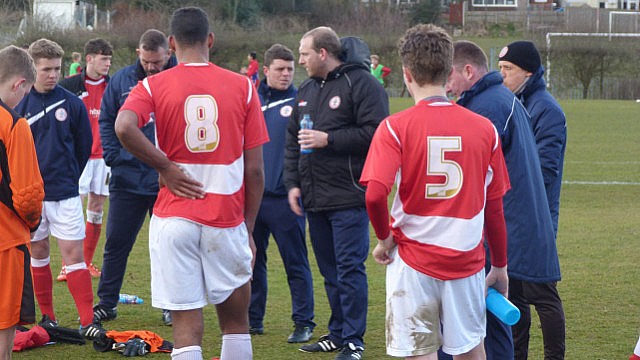 Stanley Academy Manager John Townson admitted that defeat for the under 18’s in the Youth Alliance Cup left him with conflicting emotions.

The young Reds were beaten in the semi-final by a last minute Oldham goal.

Townson felt that it was a game that could easily have gone either way.

“I think if I’m honest, over the 90 minutes we probably didn’t deserve to win the game,” he said. “There wasn’t much in it but they pushed us back late on and got the goals.

“If you can just step back and look at the bigger picture though, the fact that it took them to the last minute to just pip up when they’ve been putting four and five past teams this season suggests that we have come a long way.

“I’m gutted and I’m gutted for the lads but they’ve come a hell of a long way over the last few months. I suppose to even be talking about an area final is an achievement for the club even if it doesn’t feel like that now.”

The team had won their previous five games in all competitions and the Academy Manager thought there were further positives to take even though that run came to an end.

“I thought Keenan Quansah was magnificent today,” he explained. “For me he was the best player on the park and Max Hazeldine and Kealan Steenson showed hints of what they are capable of.

“Nathan Webb got himself another goal and he’s certainly one to look out for in the future but all of the players will be better for this experience. Next time we play a cup game we’ll be a bit wiser and will maybe do a couple of things a bit differently.”

The youth side are back in league action on Friday when they host Port Vale and the manager wants his young players to respond in the right way.

“I think Friday will tell us a lot about the lads and whether they can go on to have successful careers. In football you have to be able to dust yourselves down and go again quickly. We have three games in the next eight days so it’s quickly onto the next one.”