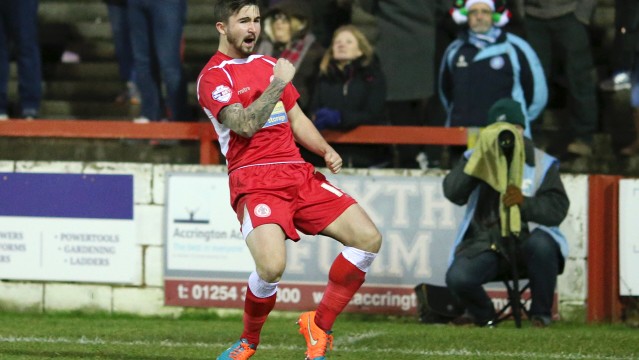 Stanley forward Sean Maguire is hoping for a St Patrick’s Day to remember – by helping his team mates to victory over high flying Wycombe Wanderers.

Maguire returned to the side for Saturday’s defeat at Burton and is now out to keep his place for tonight’s trip to Adams Park.

The Irishman wants a special day for his fellow countrymen to be reason to celebrate for all Stanley supporters.

“It’ll be a much better St Patrick’s Day if we get the win!” he laughed. “I think it’s celebrated better in some countries than others. I know in places like New York it’s a massive thing but hopefully we can be celebrating in Wycombe tonight.

“We can beat anyone in this league. It’s been frustrating that we haven’t been consistent enough – the manager has been frustrated with that – but I know we can go to Wycombe and beat them.

“When we’re expected to win I think there is more pressure on us and it’s harder for us to create chances because sides sit back against us. When we play the teams at the top I think they allow us time on the ball.”

Maguire returned to the team in place of the suspended Anthony Barry at the Pirelli Stadium and believes they have to take the positives from their defeat to the league leaders.

“Like the manager said, it’s hard to congratulate us for losing 3-0, but we did really well with the way we played in the first 25 minutes of the second half,” he explained.

“I had two opportunities and maybe, on another day, I’d score them but the gaffer was happy with how we played and I don’t think the 3-0 scoreline reflects the game. A fair result would have been a draw, but we can take the positives from it going into the Wycombe game.”

Maguire’s last Stanley goal was against Wycombe in the 1-1 draw at the Store First Stadium in December and he’s keen to trouble the scorers again tonight and get the party started for the travelling contingent.

“All I need is one more goal to kick-start me going into the last ten games of the season. Hopefully the manager throws me in again and I can get a goal.”