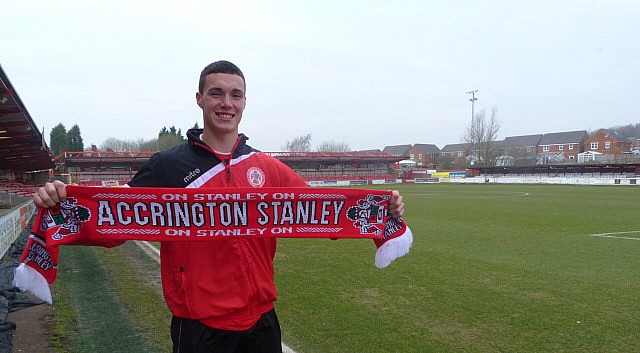 The 19-year-old moves to the Store First Stadium for an initial month.

He has experience at League Two level following a similar spell at Cheltenham Town earlier in the season.

“I came here to play first team football on a Saturday and I’m really looking forward to the challenge,” said the England under 20 international. “I’ve already been at Cheltenham this season so I’m not completely new to the league and I think that will help. I’m hoping I can start with three points on Saturday.

“Under 21’s football is great for development but this is the real world and this is real football and you have to be playing.

“I’ve come here to learn so the experience of people like Rob Atkinson and Dean Winnard will help me in training and in games. Hopefully that can only help me further my career.”

“Defence is probably the one area that we’re a bit short in and Lloyd will be a great addition to our squad,” added Stanley boss John Coleman. “His experience at this level with Cheltenham will help him. We’ve got a good set of lads here and he’ll fit in well.”

Lloyd Jones will take the squad number five at the Store First Stadium and goes into the squad for Saturday’s trip to Burton Albion.