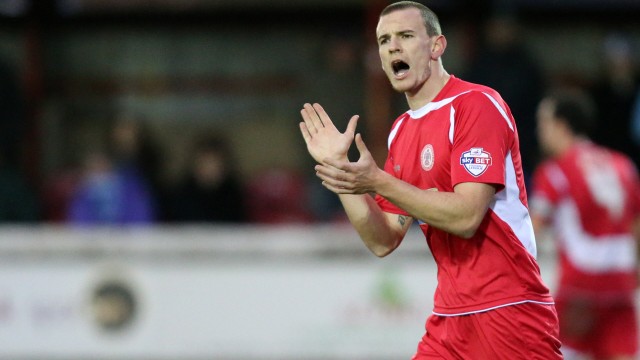 Let’s end on a high: Winnard

Long serving defender Dean Winnard is confident this current ever-improving team can be a force to be reckoned with next season.

The 25-year-old came to Stanley in 2009 from Blackburn and is the longest serving player alongside captain Luke Joyce.

He has seen Stanley reach the play-offs and also battle relegation in his time at the club and he admits this has been a season of change.

But he feels the club is settling down and the focus is now on finishing well and building for next season.

“There have been a lot of ups and downs this season,” said defender Winnard. “It was a massive shock when James Beattie left in September as he did a lot for the lads and for myself.

“Then I found out John (Coleman) and Jimmy (Bell) were returning and obviously I had a good relationship with them in the past. The gaffer was the one who give me the opportunity to be a professional footballer and him and Jimmy seem to bring the best out of me.

“As well as the managerial change, results-wise it has been a bit of a roller coaster. I don’t think losing Jonno (John O’Sullivan) helped. It was a blow when he returned to Blackburn as he was a massive player for us.

“But now we have Terry (Gornell) who has come in and has had a massive impact  – I forgot how good he actually is!

“For me personally, it’s also been a season of change. I played centre back for James Beattie and then the gaffer came in and I moved back to full back which took time to get used to playing again.

“I don’t mind playing either although I probably prefer full back when the team is playing well and winning as it enables me to go forward but I prefer centre back when it’s not going so well so I can try and have a big impact in the games and stop it.

“Now though the focus for the team is on ending this season on a high. We want to get to around 54 points, keep the league status and then maybe look to the top half and aim for as high as we can.

“We have a great squad this year, we have always had a strong starting XI but this year anybody can play and do a good job.

“I think, with a bit of tinkering here and there, we can be a real force next season.”