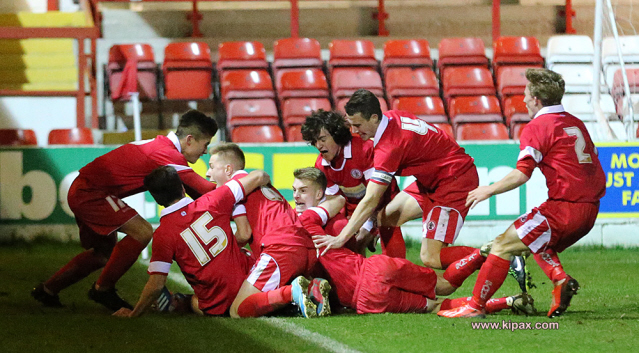 Jack Hartley was the goal hero as Accrington Stanley’s youth team celebrated a 1-0 victory over Blackpool to move into the Youth Alliance Cup semi-finals.

Hartley got on the end of Kealan Steenson’s cut back and fired the ball into the roof of the net in the 68th minute last Tuesday.

They will now play Oldham at home in the semi-finals on a date to be decided.

“It was a really good performance,” said the Head of Academy John Townson. “They only had one or two half attempts on the goal as we were extremely solid.

“If we had scored earlier, we could have gone on to win more comfortably but I never felt we were never in trouble.

“That’s two 1-0 away wins on the spin and two clean sheets which is always pleasing.”

Townson feels his youth team have now turned a corner after they struggled at the start of the season.

“In our last three away games, we have had two 1-0 wins and a draw. We didn’t have the best of starts to the season but we have stayed positive and kept going.

“The lads have worked hard, they have believed in what the coaches have been telling them and it is finally coming to fruition.

“In our last five games, we have had half-a-bad game. There have been four-and-a-half very good performances and that’s pleasing.”