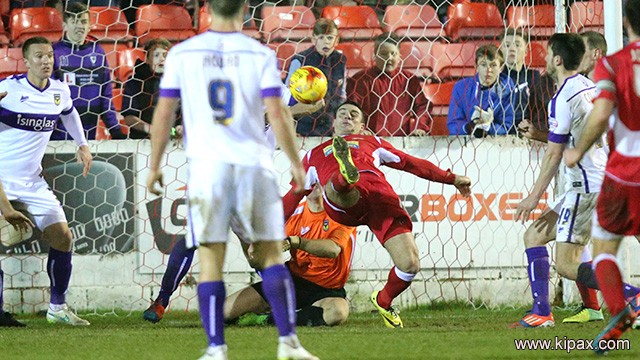 The striker, who returned to the club on deadline day, took advantage of a loose ball and acrobatically beat United goalkeeper Ryan Clarke to stop the rot of five straight defeats for the Reds.

Oxford’s James Roberts had earlier missed an open goal for the visitors but Stanley had created the better chances throughout and were full value for the three points.

John Coleman made three changes to the team which suffered a narrow 1-0 defeat at Plymouth Argyle on Saturday with Seamus Conneely, Anthony Barry and Shay McCartan dropping to the bench, allowing Adam Buxton, Andrew Procter and the debutant Gerardo Bruna to take their places.

Scott Davies was also given a home debut between the sticks and Terry Gornell was named as the lone striker in his first game back at the Store First Stadium since his return to the club on deadline day.

Given their recent form, the last thing that the Reds needed was to fall behind early on and the returning Buxton stopped the visitors from taking the lead in the opening minutes as he cleared off the line from Josh Ruffels in the middle of a goalmouth scramble following an Oxford corner.

Bruna’s first contribution in an Accrington shirt was to put a 20-yard free-kick into the side-netting before Patrick Hoban’s speculative 30-yard strike was gathered easily by Davies.

A deft pass by Josh Windass gave Gornell a sight of goal but pressure from U’s defender Johnny Mullins was enough to put the striker off and he skewed his effort wide of the target.

Buxton was again Stanley’s saviour at the back, blocking a goalbound effort from Alex MacDonald after the former Burnley man collected Joe Skarz’s cross 12 yards out.

Coleman’s men responded and put together a slick passing move involving Bruna, Gornell and Windass which ended with Jake Wright clearing a Windass cross from underneath his own crossbar. The corner was taken short and Windass saw a shot deflected wide of Ryan Clarke’s goal.

Skarz was alert to clear the danger when a clearance by Mullins almost ricocheted into the path of the lurking Bruna and Luke Joyce lashed wide on the half-volley from the next attack.

Stanley came agonisingly close to opening the scoring when full-back Buxton cut in from the left onto his right foot and curled a stunning effort against the crossbar from 25 yards which left Clarke grasping at thin air.

Joyce went into the referee’s book for a foul on Oxford’s Danny Hylton as the striker looked to break into the Accrington area. Callum O’Dowda’s free-kick was caught by Davies.

Bruna put a free-kick over the bar and a quick break from the visitors ended with MacDonald clearing the Clayton End with his 20-yard shot.

A free-kick from a similar distance gave the winger a chance to redeem himself but he repeated his trick from a few minutes earlier and sent the ball over the stand towards Clayton-le-Moors.

Windass tested Clarke with the final chance of goalless first half, trying to catch the goalkeeper out at his near post but the stopper was equal to the effort.

In the opening moments of the second period, both sides traded opportunities to take the lead.

Oxford threatened first as MacDonald threaded a pass into the penalty area but it had too much power for Hylton to capitalise on.

Stanley went up the other end and hit the woodwork for a second time as Piero Mingoia found Bruna, who hit a left-footed shot against the near post with Clarke again well-beaten by the strike.

Bruna’s delivery from corners were causing a threat to the visiting defence and the Argentine fired in a beauty which fizzed through the penalty area, narrowly missing the onrushing Rob Atkinson.

After absorbing wave after wave of Stanley pressure, Oxford ought to have taken the lead when substitute James Roberts spooned a shot over the bar on an open goal after being found at the far post by Hoban’s cross.

Michael Appleton’s side continued to press for the breakthrough and O’Dowda worked space for a shot but hit it straight down the middle of the goal, into the gloves of Davies.

Desperate to find the opening goal, Procter galloped onto a loose ball, took aim from 25 yards and unleashed a powerful effort that whistled over Clarke’s fingertips and his crossbar.

Stanley eventually found the goal their pressure deserved just seconds after five minutes of added time were shown by the fourth official.

Kal Naismith’s free-kick on the right wing was nodded back across the face of goal by Atkinson and Gornell hooked the ball over his shoulder and into the roof of the net to send the Store First Stadium into delirium.