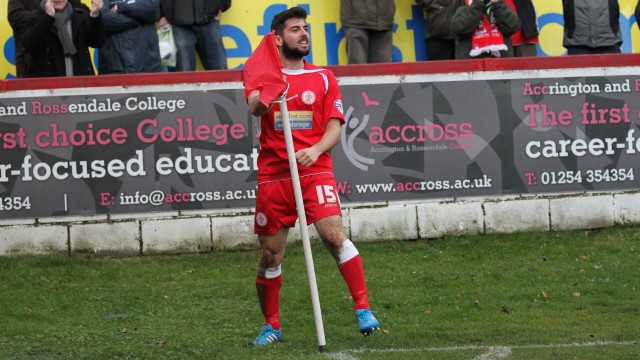 Piero Mingoia says he has clicked with Stanley ‘new’ boy Terry Gornell and hopes it pays off again tomorrow night at home to Cheltenham.

Winger Mingoia and Gornell were both on the scoresheet in the 2-1 win at promotion-chasing Southend last Saturday and Mingoia says he has formed a strong partnership with the striker despite just three games together.

“We seem to have got a little bit of a connection in the first couple of games,” said Mingoia, with Gornell coming up against the Robins almost immediately after leaving them at the beginning of February.

“Terry and I seem to be on the same wavelength. Our styles kind of suit each other and it’s worked in the last two games.

“Terry is relaxed about coming up against his former club. He’s scored two in two games so hopefully he will score another one on Friday.”

Mingoia now has five goals for the season and is the Reds joint top scorer with Shay McCartan and James Gray.

“It’s nice to be able to nick a goal at Southend,” continued the former Watford man. “It’s a difficult place to go and they were on a great run so it was great to get a victory under our belts.

“Whenever I get the chance, I try to play well and try to nick a few goals. I’ve realised the more I shoot they keep going in, so I might as well keep shooting!”

Stanley went on a run of five successive defeats before the back-to-back wins and Mingoia says the confidence has returned to the squad.

“It was tough when we kept losing but it’s about keeping going until you finally get that win and we managed it against Oxford and then followed it up at Southend.

“It certainly makes the mood around the camp a lot easier but we don’t want to undo our hard work by losing against Cheltenham.

“Hopefully we can repeat our recent performances and pick up another three points. I don’t mind who scores – although I obviously want as many goals as possible!”