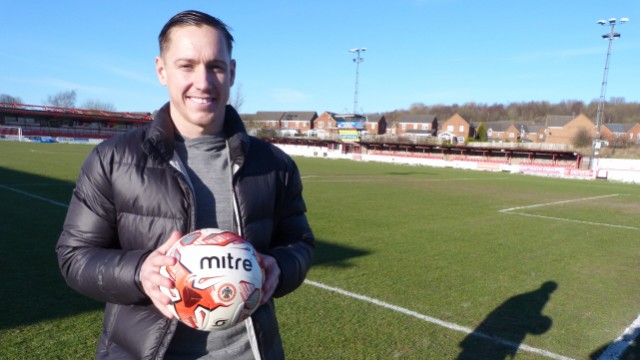 Goalkeeper Scott Davies admits a late approach from Stanley on transfer deadline day was something of a surprise but a move that he was delighted to make.

The Fleetwood Town man became John Coleman’s third signing of Monday when he put pen to paper on a loan deal until the end of the season.

The transfer window closed at 11pm and it was a move that cut things fine, with all being sorted at around 10:30pm.

“I got a phone call from the manager at about half past nine and he asked me if I wanted to come,” explained Davies. “Obviously I need to play football so I jumped at the opportunity and had to rush round getting to the Fleetwood club secretary’s house and get it all done. Thankfully it got done and hopefully I can now look forward to the next 19 games of the season.

“There were one or two things throughout January that I thought might happen but for whatever reason they didn’t and this opportunity came up.

“I know a few of the lads here from my Fleetwood days that I still keep in touch with and they can’t speak highly enough of the lads and the potential there is here. It was an opportunity that I jumped at.

Davies is an experienced custodian with over 150 appearances for the Cod Army under his belt and ten League Two appearances this season in a previous loan spell at Morecambe.

The 27-year-old is confident that he can hit the ground running at the Store First Stadium.

“This is a great little club with a manager who I’ve always admired for what he’s done with Accrington Stanley over the years and it was an opportunity I jumped at,” he said.

“I’d like to think my experience can help. I don’t want to disrespect anyone that has played before me but I like to think I bring a bit of leadership. I’ve captained Fleetwood, I’ve been around the game a long time now and hopefully I can bring what I’ve brought to other teams over the years and help the club through the period they are in.”