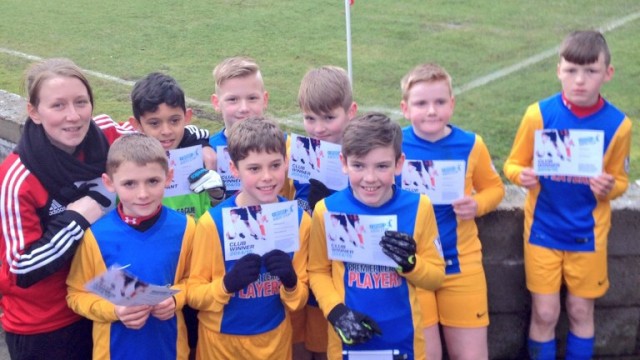 Our Kinder+ Sport Football League Kids Cup competition finished with a flourish last week as Huncoat Primary School proved they have what it takes!

The Kids Cup is an under 11 football based tournament which all football in the community trusts up and down the country run on behalf of the Football League Trust. Each Community Trust organise their local competitions, with each winner representing that football club at the Regional Finals, with a chance to get through to the National Finals, played at the home of English football, Wembley!

After the successful group stages, ran in conjunction with the Hyndburn and Ribble Valley School Sports Partnership back in October, Peel Park, St Marys Langho, St Marys Mellor & Huncoat made it through to our finals stage. Along with enjoying the league two fixture, the boys played two games on the pitch during half time.

The Finals line-up saw St Marys Langho take on Peel Park in the 3rd/4th place playoff and St Marys Mellor and Huncoat battling it out in the club final for a chance to represent Accrington Stanley at the Regionals Finals.

The 3rd/4th place playoff proved a tight affair with Peel Park coming from behind to beat St Marys Langho 2-1, with a wonderful long range goal winning the day for Peel Park.

The club final saw our two district champions, Hyndburn’s Huncoat and Ribble Valley’s St Marys Mellor lock horns, with Huncoat having that extra bit of quality to edge out their opponents 2-0 and become our Kids Cup Champions for this season.

Huncoat will now go on to represent the club at Regional Finals on Tuesday 10th March 2015 in Morecambe, with a chance to represent Accrington Stanley at Wembley if they win their Regional tournament

“It was brilliant to see our four best teams from our group stage tournament come together for our finals stage” explains Stanley Trust Sports Development Officer Chris Mullen “to have the finals on the pitch at half time makes the event that little bit extra special for all players, parents, teachers and families involved, which they will remember for a long time to come! All four teams will have mixed emotions at the end of the day but they all enjoyed it and did extremely well to reach this stage in the first place from the large amount of teams that took part in our group stages back in October”.

Accrington Stanley Community Trust & Football Club would like to say good luck to Huncoat at the Regional Finals in March and a massive thank you to all four schools (children, parents and teachers) that put the effort and time into making it through to our finals stage!

We look forward to seeing you all at the Accrington Stanley Kids Cup Competition next season!