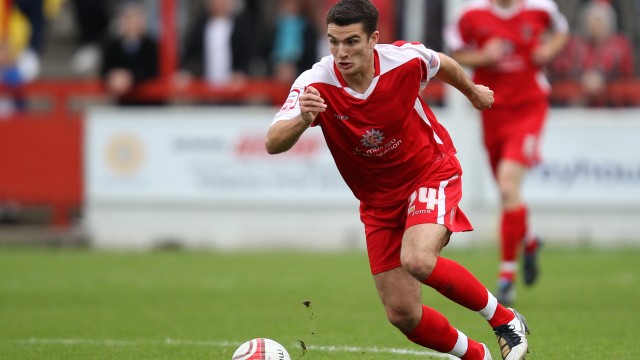 Terry Gornell is coming back to Stanley after signing for the club on a free transfer.

The striker has agreed an 18 month contract to return to East Lancashire after leaving fellow League Two side Cheltenham Town.

Gornell has already had two spells at the Store First Stadium, first on loan from Tranmere in 2008 and then as a permanent part of the successful team that reached the play-offs in 2011.

“As soon as I heard from the manager I wanted to get back up there and get it done,” admitted Gornell. “I can’t wait to get back to Accrington and get started now.

“The last time I was there I left with good memories although I thought that we were good enough to get promoted. We had a great season and hopefully we can bring those days back now.”

“This was too good an opportunity to turn down,” said Stanley manager John Coleman. “We needed that type of player, just for his work rate alone and his ability to hold up the play. I think he’ll be invaluable to us. Terry probably played his best football under us so we hope we can rekindle that.

“I think he’ll be a better player this time around. When we had that great run that led to the play-offs Terry was instrumental and we think he can get back to that. He’s a little older and more experienced and I’m looking forward to working with him again.

“He knows us and a lot of the players and we don’t expect he’ll have much settling in to do. It’s a great move for both parties.”

The official website will have a full interview with new signing Terry Gornell tomorrow.