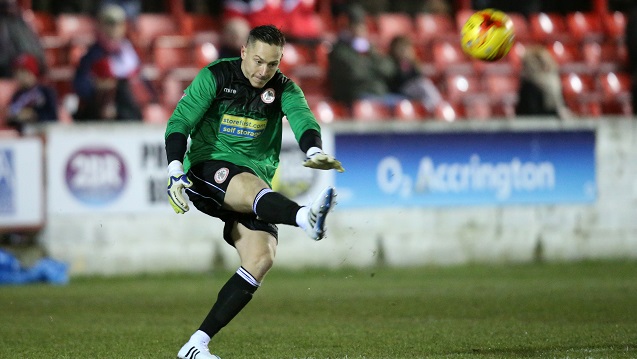 Keeper Scott Davies praised his Stanley team-mates for helping him have a relatively comfortable afternoon in the 2-1 win over promotion-chasing Southend on Saturday.

The 27-year-old was playing his third game for the Reds following his loan from Fleetwood and, while he admitted he was not the happiest at conceding a goal, he was more than delighted with the top show from his new side.

Piero Mingoia and Terry Gornell gave the Reds a 2-0 lead before Barry Corr headed home at the far post for the Shrimpers.

“I was delighted with a clean sheet at Oxford midweek and I would have liked one at Southend and, if I am honest, I felt we deserved one,” said Davies.

“But Barry Corr seems to score that goal against me every time I play against him. Selfishly,  I would like to keep clean sheets but six points out of the last nine is a good start.

“Terry up front has been absolutely outstanding for us since I came here and the lads in front of me, Rob (Atkinson) and Dean (Winnard) were fantastic against Southend.

“They all protected me well, I only had to deal with a few crosses and, when you come to Southend you expect to be busy, so that’s credit to all of the lads in front of me that I didn’t have too much to do.”

Davies is now focusing on making it three wins on the bounce for the Reds and looking upwards after the worrying spell where Stanley lost five games and were suddenly looking over their shoulders.

“On any given day any team in this league can beat anyone and I don’t think there is much between the top and the bottom,” added Davies.

“If we can get a couple of results like we have, then I think we can be pushing for the play-offs.

“This is how quickly this league can turn around so it’s about keeping our feet on the ground.

“It’s Cheltenham on Friday and the manager has said we will be the favourites which will be something a bit different for us.

“We have to make sure we remember what has got us these two results in the last week and make sure we stick to the same principles.”