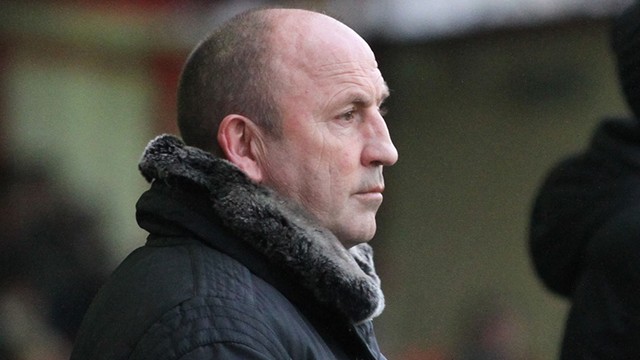 John Coleman admits he has tough team selection decisions to make ahead of tomorrow’s home game with Oxford United.

The Stanley manager has branded this a crunch match, with the Reds aiming to end a five match losing run at the Store First Stadium.

Three deadline day signings have added to the squad with Terry Gornell and Scott Davies coming into the side for Saturday’s trip to Plymouth Argyle and Coleman is now seeking the right balance.

“I’m sure a lot of our fans will have an idea of what their favourite team is or what their best team would be,” he said. “I don’t think any of the players know what the best fit is at the moment so it’s important that we keep exploring it.

“That’s not just making changes for changes sake; we have to formulate a reason for why we are doing it and validate that with the players. The players have to realise that if they aren’t picked one day they might be the next. There’s no personality involved. Since Paul Mullin left I haven’t had a favourite player. It’s all about trying to win a game. It’d be churlish of us to just pick people because we’re more fond of them than other people. The bottom line is we need results.

“We’ve experimented with different systems, looked at playing three behind the one, 4-4-2 but the system can very quickly go out of the window. It’s eleven against eleven and if your players are better than the other team’s on the night it doesn’t matter what system you play.

“We’ve just got to get our players up for the game and we’ve got to get them back on form. That’s our job and it’s what we’re striving to do.”

Striker James Gray missed the trip to Devon with a groin problem and is being assessed ahead of tomorrow’s game but otherwise the squad is likely to be the same.

“Whoever gets trusted with the job, we are expecting big things from them,” concluded Coleman. “We’ve got to make it our day and the only way you do that is by believing what you are doing and believe in each other and that we have a squad, we are united and in this together.

“You could see the spirit on Saturday. They kept going right til the end and hopefully the hard work will pay off with a result on Tuesday.”