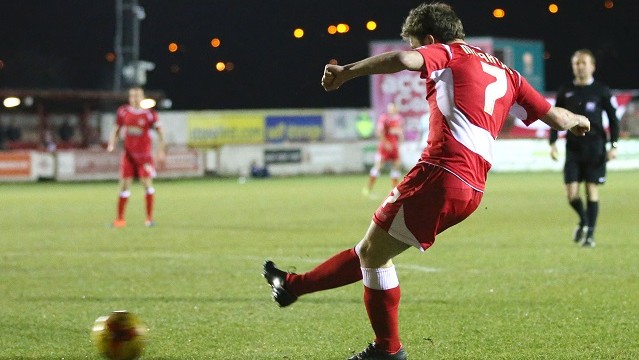 Shay McCartan has leapt to the top of the Stanley scoring charts with his sixth goal of the season in Friday’s 1-1 draw with Cheltenham.

The 20-year-old had only been on the pitch three minutes after coming on as a substitute when he fired home the equaliser against the relegation-haunted Robins.

“Personally it was nice to score although we were all disappointed to only draw the game,” said McCartan.

“The ball fell to me and I hit it first time and it went through the keeper’s legs. I will take them all day!

“But it was a frustrating game to watch from the sidelines as they had 11 men behind the ball for most of the first half, and the second really,  and they nicked a goal against the run of play.

“That was a set-back and it was hard to break them down as there wasn’t a lot of space to get at them, even though we had a strong attacking line-up on the field by the end of the game.

“We put balls into the box but, when it’s so crowded, it’s hard to get something out of it and the mood was down immediately after the match.

“But you have to take the positives in that it’s seven points from three games after a five-match losing streak and we have to build on that.”

McCartan will now be pushing for a starting spot and knows Tuesday night’s opponents, league leaders Burton, will be a different proposition to Cheltenham.

“Burton, and higher placed teams, will come here and have a go so you expect to have more time on the ball and more space so it should be interesting.

“They are flying high but we have to pick ourselves up after Cheltenham, be confident and do what we did against Southend and Oxford which got us the victories.”