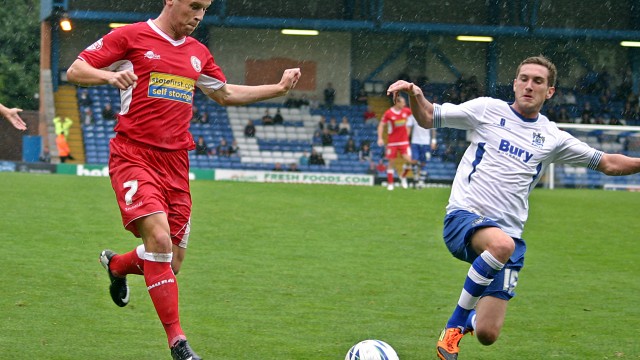 Shay McCartan is happy to be the Reds joint top scorer – although he expects some stick of team-mate James Gray.

Gray had held the title of top scorer after scoring five goals up to mid- September but McCartan’s leveller in the 2-1 win at Exeter on Saturday brought him in line with the striker.

“I am sure James Gray will have something to say about it,” smiled McCartan, 21. “I hadn’t realised to be honest but I am sure there will be plenty of banter flying around!

“It was a brilliant game though and we deserved the win at Exeter. We pressed them well in the first half and that’s what the gaffer said at half-time but they are a good footballing side and we were 1-0 down.

“We had our chances but it’s also about a bit of luck and Moly (Lee Molyneux) has put in a ‘buffet’ ball as he said and I  have headed it in. I couldn’t miss to be honest.”

Then defender Tom Aldred turned out to be the hero at both ends – clearing a ball off the line at one end in the final minute and then scoring a 92nd minute winner.

“Tommy has cleared one off the line and that’s a match-winner, the clearance he made,” said Northern Ireland Under 21 international McCartan.

“Then I thought Kal (Naismith) had crossed it at the end but apparently it’s a shot, he has insisted on that, but their keeper saved it and Tommy has reacted and tapped it in and then everyone went mental. It was brilliant.

“It’s a great win for us and now we need to focus on Bury on Friday, go on a run, get into the play-off places and stay there.”