The Arsenal man joined in with his team mates for a session at the Store First Stadium as they stepped up preparations for Saturday’s trip to Wimbledon.

And the 20-year-old enjoyed the unorthodox playing surface, which was a far cry from conditions he’s become used to at his parent club.

“It was quite fun really,” he said. “It’s just one of those things that you have to deal with in football sometimes. You can’t just not train and you have to make the most of what’s available. We had some good fun and managed to get a good session in to be honest. 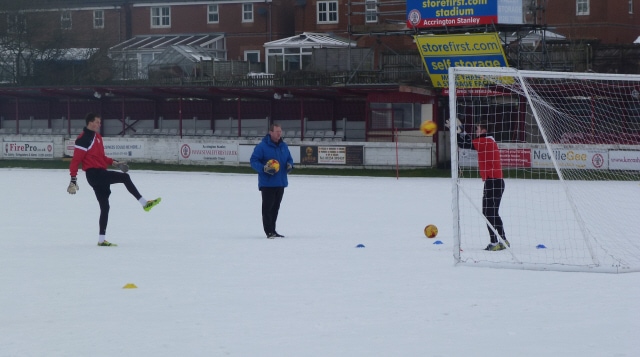 “Snow isn’t bad to dive on! I was saying to Dawbs that I prefer to dive on that than some 3G surfaces because at least it’s nice and soft. There were a few dodgy bounces and bobbles as the ball came in so it was entertaining but I don’t think it was as bad for the keepers as for the outfield players.

“This is such a positive place. We turned up for training and didn’t really know what was happening then we decided to train on the pitch and everyone got on with it, there was no moaning.”

Macey made his senior debut in last weekend’s defeat at Tranmere and though it wasn’t the result he wanted he’s now keen for more.

“Saturday was a tough result for us and I don’t personally think we deserved to lose 3-0 given the chances we created but apart from that game it’s been a brilliant couple of weeks for me,” he explained. “Even with the bad result it’s still positive and we’re ready for the weekend.

“Now I’ve got that first appearance under my belt hopefully I can get on a run. The aim is to make many, many more Football League appearances in my career and hopefully it won’t stay at just one!

“Wimbledon is a long trip for us but we’ll travel down tomorrow and prepare right. We know it’ll be a competitive game, they’ve got some good players and did well against Liverpool recently so it’ll be a test.

“Hopefully lots of people I know will be there watching me. I’ve got quite a lot of family in London so I’m trying to sort them out some tickets to go in the Accy end. That’ll be fun for them.”