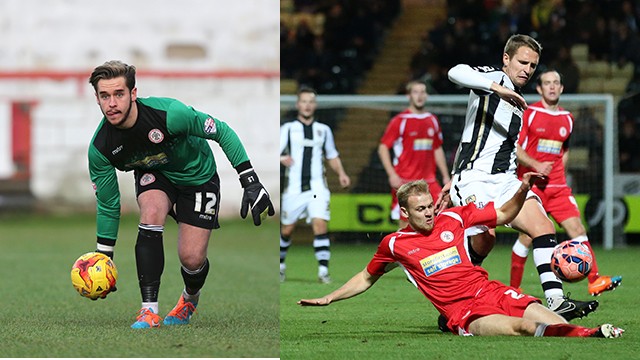 Two players have left the Store First Stadium after their contracts came to an end.

Goalkeeper Luke Simpson and midfielder Craig Roddan are both moving on after the expiration of their short term deals.

Simpson joined the club in the summer and made eight first team appearances, with Roddan featuring once in the FA Cup at Notts County.

“It’s a difficult one for Luke because it’s been no secret that we’ve had good keepers on loan who have got injured. We were looking at a short term contract for Luke but he feels as though he’s better off looking elsewhere because he needs to play,” said manager John Coleman.

“I’ve got no problem with that. I always think that players should want to play and so it’s a testament to the lad’s character that he wants to play and doesn’t want to sit around and be a number two.

“Ultimately that’s the reason why he’s decided to leave the club.

“Craig Roddan is pretty similar. He could’ve stayed here until the end of the season and not really played but he’s got a lot about him and he just needs to be playing regular football. If he gets ten or 15 games under his belt then maybe we could see him again next year at the club.”

Everyone at Accrington Stanley would like to thank Luke and Craig for all of their efforts and wish them the best of luck for the future.