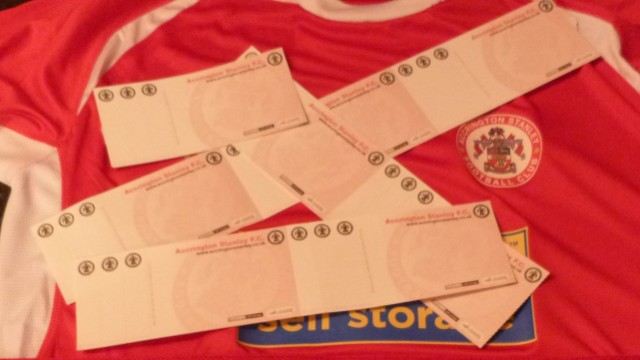 The run of 250 tickets for the game against the Premier League giants that would have followed a second round replay win at Yeovil were snapped up inside 36 hours via the club website.

Sales were made to people around the world looking to get involved with the campaign to help John Coleman and the players push for the play-offs.

The tickets attracted national and international publicity, with demand outstripping the number of tickets available.

“Thank you to everyone who bought a ticket to the Game That Never Was,” said Chairman Peter Marsden. “We have had a huge cross section of people from not just Lancashire, but all over the UK and abroad who have bought tickets. To sell out so quickly is no mean achievement.

“Going ahead I think that trying to tap in to the national and worldwide affection for and interest in Accrington Stanley could well prove our secret weapon as given our gates (and this is no disrespect to the 1,000 or so regulars who I have the deepest regard and admiration for) we have to continue to think ‘outside the box’ if we are to prosper.

“The campaign has attracted a massive amount of media interest including all the national newspapers, national radio and TV. To my mind the reaction from national media has been extremely positive and reporters / interviewers have warmed to us for mounting a clever campaign in a deliberately tongue-in-cheek slightly off-the-wall way.

“The £5,000 or so raised is but a drop in the ocean to the amount it costs to keep the club afloat every year but can make a difference and everything raised will go to help John build his team.