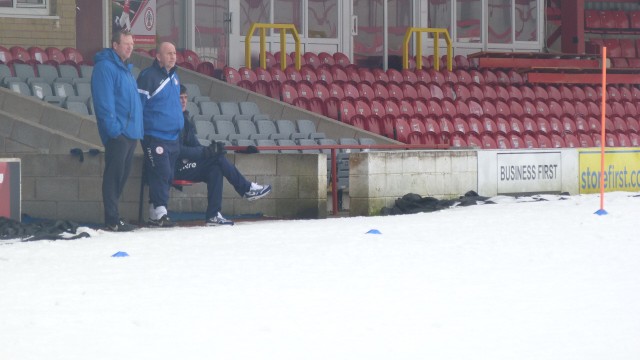 John Coleman is hoping to have Sean Maguire back for Saturday’s trip to AFC Wimbledon.

The West Ham loanee was with the Reds for four months before his spell finished after Saturday’s defeat to Tranmere.

But Coleman is hoping to have the forward, who has scored four goals for the Reds since he first joined in September, back this week.

“We are trying to bring Sean back and I am confident we will get that over the line before Saturday,” said Coleman.

The Reds boss admitted trying to right the wrongs of Saturday’s 3-0 loss at Prenton Park has been tricky with the bad weather.

The players resorted to training on a snowy Store First Stadium pitch on Thursday.

“You have got to try and be upbeat but it’s been difficult to do what we were planning to do as the weather has got in the way,” said Coleman.

“It hasn’t been ideal but we have had a chance to watch the the video and dissect it. We have found the areas where we can improve as a team and it was a valuable exercise.

“You have to be serious about every minute of the game but we weren’t serious in the first 20 minutes and that’s when we lost the game.

“We have defended manfully and we have got the ability to defend manfully as we have seen in a number of games this season but at times we go to sleep.”