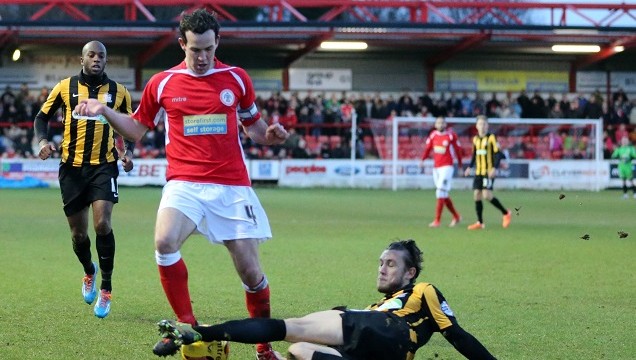 Luke Joyce knows the second goal was the killer moment as Stanley lost 2-1 to AFC Wimbledon.

Sean Rigg had given the Dons the lead in the first half and then, as the Reds were getting on top, Stanley lost the ball on the wing and George Francomb found Adebayo Azeez who was free to fire home the vital second on 78 minutes.

Stanley got an 88th minute consolation through Adam Buxton but it was too late to salvage a point.

“We are all frustrated and disappointed,” said the skipper. “There wasn’t a great deal in the game and the second goal was the sucker punch especially in the manner we conceded it.

“If we hadn’t conceded that, Adam’s goal could have been the equaliser but it’s all ifs and buts.

“We desperately wanted to win this game and, while it’s two defeats on the bounce, it’s not a major crisis and we have the chance to put it right on Tuesday in a massive local derby against Bury.

“You only have to look at what happened last season and how we bounced back and I am sure we can do it again.

“It’s a long trip home to think about it but we have to look at ourselves and be honest with ourselves and think how we can improve.”