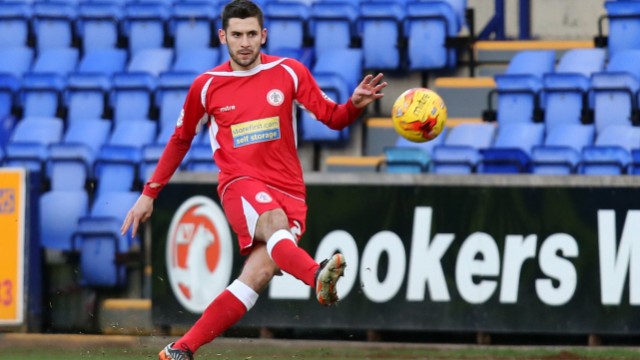 Stanley defender Seamus Conneely is loving life in the Football League and a host of new experiences but feels that three points at the weekend is the next item on his to do list.

The former Sligo Rovers man has played twice since joining the club earlier this month, playing in three different positions in the process.

His first start, at Tranmere, was his first game in English football and he was pleased to be given the opportunity even if it didn’t go as planned.

“I didn’t expect it to have come as early or quick as it did if I am honest but it was good to make my Football League debut and get it out of the way,” said the 26-year-old. “I was disappointed with my performance against Tranmere and then the team as a whole with losing 3-0 but we were better against Bury so we need to build on that.

“When I was at Sheffield United I never had that experience, I wasn’t involved in the match-day, so I am enjoying it and playing full-time football in England is what I have dreamed about.”

Saturday’s home game with Northampton Town is the start of a punishing schedule which will see the Reds travel to Plymouth, Southend and Luton in the month of February as they tackle seven matches in five weeks.

But Conneely is welcoming the chance to roll up his sleeves and get stuck into life in League Two.

“I am not used to the long journeys, in Ireland the longest journey we had was three hours maximum, that’s the only game we would stay over at but here it’s nearly every other week in a hotel it’s something for me to get used to,” he explained. “My aim is to play and keep myself in the team.”

With the Reds suffering defeat in their last three games, attention now turns to the Cobblers and Saturday’s encounter at the Store First Stadium and Conneely believes the home team are more than capable of prevailing .

“I really think we can build on that second half performance against Bury, get a few goals, we are due to win a game and to put three or four past a team,” he concluded. “I am sure it will come. If we can take a lead in the game it will give us a lift and give us something to hold onto and hopefully that will be against Northampton.”