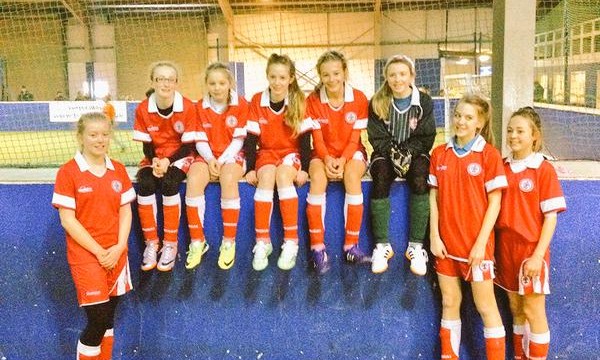 After winning the Accrington Stanley Community Trust local finals back in November, beating strong competition from Hollins Technology College in the Final at the Storefirst Stadium, B.R.G.S joined nine other schools from across the North West Region for a chance to qualify for the Northern area final and get one step closer to playing at Wembley during the play off finals.

Despite a 1-0 and 4-0 defeat to Bury and Bolton in the first two games, the girls came back strong, playing out two 0-0 draws with both Morecambe and eventual Group Winners Carlisle United.

Women & Girls Officer Amy Bland explains ‘it was a fantastic day for all at BRGS. They were put in a really tough group and were really unlucky on the day, hitting the post no fewer than five times! They deserved to win our local competition and proudly represented the football club at the Regionals. Fantastic effort girls and Mr Baird, well done!”

Congratulations to Bacup & Rawtenstall Grammar School and we look forward to seeing you at next year’s competition!

If your school is interested in taking part in next year’s Accrington Stanley Girls Cup or would like any more information please get in contact with the Community Trust on 01254 304071 or email info@stanleytrust.co.uk