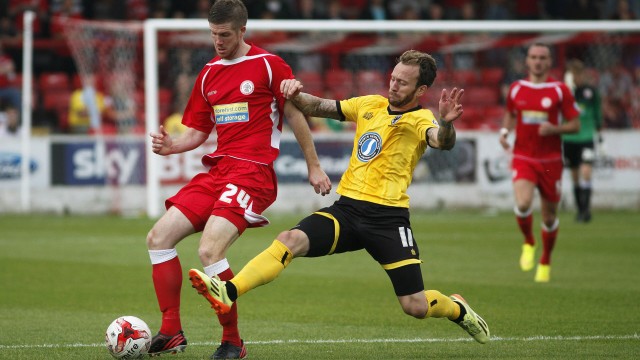 We will monitor Proc: Coley

Accrington Stanley will be monitoring midfielder Andy Procter ahead of Saturday’s clash at Portsmouth.

The midfielder came off in the FA Cup tie against Yeovil with a groin strain and boss John Coleman is unsure if Procter will be fit for the trip to Pompey.

“He was having a great game at the time against Yeovil,” said Coleman. “He was everywhere, all action, and having a big impact.

“I know Proc will be keen to play on Saturday but we’ll monitor him. With a groin strain sometimes you think you are okay and then it’ll go again.

“The last thing we want to do is lose him for six to eight weeks. Proc’s a qualified physio so he should know what he’s doing and be able to manage it himself.”

Coleman has got options to replace Procter. He said: “We played a friendly against Bacup this week and the players showed a great attitude for the game and a great appetite in difficult conditions.

“We do have a massive squad but that can quickly change. However, I do have selection problems about who will travel to Portsmouth and I have some big decisions to make but what players have got to understand is that I am only trying to do what is best for the club.”

One bonus is keeper Jack Rose extending his loan from West Brom until mid-January.

“Jack is a great keeper and, at his age (19), he will only get better. The more exposed he is to league football, the better he will get.

“Goalkeepers improve with game time, with their decision-making and so on. You can train all you want but, in my opinion, they need exposure to matches.”