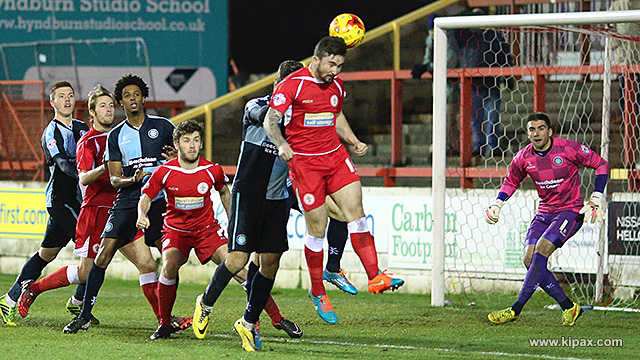 Paris Cowan-Hall’s stunning strike from 20 yards was enough for the Chairboys to take a lead into the interval but they were stopped from taking all three points back to Buckinghamshire by Maguire’s glancing header shortly after the break.

Matt McClure headed over from an early corner; Sam Wood fired erratically over the bar from 40 yards and former Stanley man Joe Jacobson struck a vicious free-kick from distance that hit a Stanley defender and bounced clear as the visitors enjoyed a strong opening to the game.

The recalled Naismith replicated Jacobson’s free-kick at the other end as a Wycombe defender blocked his goalbound effort but the league leaders showed their quality and struck a telling blow with a devastating finish from Cowan-Hall.

The winger looked to be offside as he received the ball but he curled superbly across Simpson and into the top corner from the edge of the penalty area to give the Chairboys a ninth-minute lead.

He missed a great opportunity to double his tally for the day as Aaron Pierre’s header from a corner found the winger six yards out but he could only blaze the ball over the bar with the goal at his mercy.

Stanley threatened an equaliser when Tom Aldred, who had earlier hit 8,000 consecutive minutes of football for the Reds, turned sharply in the area and got a left-footed shot away but it whistled past Matt Ingram’s upright by a matter of inches.

A quick Wycombe counter-attack led to McClure flicking wide Wood’s cross whilst a quickly-taken free-kick by O’Sullivan could not catch out Ingram in the visiting goal.

An enterprising run from O’Sullivan at the start of the second half drew a foul from Jacobson, who was booked for his troubles, and Stanley levelled from the free-kick.

Naismith whipped the ball into the area with terrific pace and Sean Maguire, one of the smallest players on the pitch, rose highest to flash a header past Ingram and into the roof of the net.

Stung by the goal, Wycombe immediately went on the offensive with striker Paul Hayes sending a looping header wide from Jacobson’s cross

Stanley began to turn the screw, and had chances to take the lead, but found Ingram in inspired form. The goalkeeper had to be at his best to deny a flicked header from another inswinging Naismith free-kick and O’Sullivan’s close-range effort.

Wycombe’s goalscorer Cowan-Hall brought a good save out of Simpson with a surging run into the area and a shot across the face of goal that had to be put behind by the goalkeeper’s fingertips.

As the conditions worsened with driving rain lashing the players, the quality of football on show decreased and the game became a war of attrition.

Rob Atkinson’s header from yet another terrific Naismith delivery was the closest either side came to grabbing a winning goal, but it sailed wide as both sides settled for a share of the spoils ahead of Christmas.