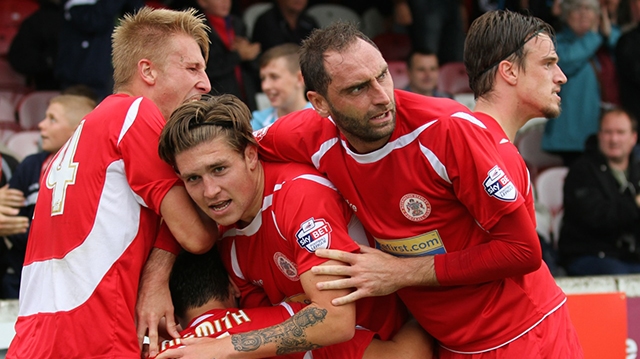 We must kick on: Hunt

Nicky Hunt says there is nothing for the Reds to fear as they look forward to the second half of the campaign.

Stanley are determined to have a strong start to 2015, beginning with their trip to Exeter on Saturday,  and make sure they are up fighting for a top seven spot.

Defender Hunt is an experienced campaigner and has seen no stand out team in League Two in the first half of the season.

“Unlike the last couple of seasons, I don’t think there is any team who we should fear, there is no outstanding team,” said the 31-year-old.

“The one team that has impressed me, I guess, has been Shrewsbury but I think, when they played us, they played well and we didn’t play to the best of our ability so I am not sure if that’s a fair reflection.

“Wycombe came here recently as the top of the league and we battered them in the second half and I am sure, if the Burton game had gone ahead on Sunday, we would have given them a great game.

“We have been strong at home recently and we need to continue this and make the Store First Stadium a real fortress going forward.”

Looking at the season as a whole, Hunt admits it has had its highs and lows.

“It has had its ups and downs,” continued the former Bolton man. “We obviously didn’t have the best of starts and then I think it was all coming together when we beat Tranmere, followed up by the home win over Wimbledon, which were two home games we needed to win.

“Then the new manager came in. These things happen, I have been in football long enough to work under a number of different managers and it is part and parcel of the game.

“Then we had the Northampton win which was special – scoring five goals away from home was really good  – and then there was the addition of our loanees and we kicked on from there with some good results and performances.”

Hunt says the addition of Irishmen John O’Sullivan from Blackburn Rovers and Sean Maguire from West Ham were a big boost to the squad.

“With Shay McCartan, they are the three Stooges and are great lads. These have all helped to create an ambience in the dressing room and it has shown in our performances and results.

“Now we are looking up and to finish fourth, fifth, sixth or seventh in the league would be an unbelievable achievement for this club and I believe we have a good enough squad to do it.

“I don’t know the manager’s plans in January but he will obviously be looking to strengthen and we will have competition in all areas and are looking a very good team. It can only help us progress.”