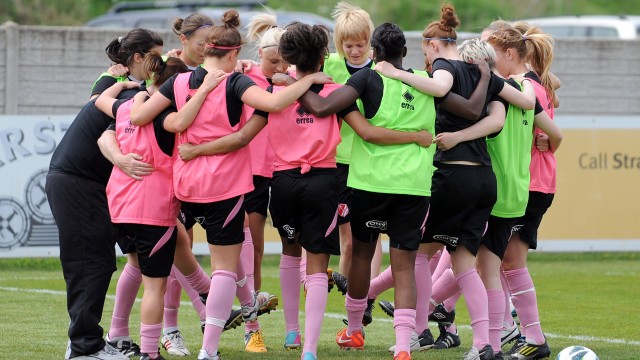 Accrington Stanley Community Trust is celebrating the success of an innovative new scheme that has seen 15,000 more women and girls playing football.

The Female Football Development Scheme (FFD) is run by 56 clubs including Accrington Stanley through The Football League Trust.  By focusing on fun and fitness rather than competition and performance FFD has brought the benefits of sport to women and girls who previously might not have considered playing football. The relaxed, social atmosphere has also encouraged players back to the sport who had previously left the game because they didn’t enjoy the overly competitive nature of the sport.

A participant from Mount Carmel High School said “Taking part in these sessions has built my confidence back up and shown how working together as a team can benefit me in different activities not just sport.”

Since the two-year scheme was launched in October 2013, over 15,000 females between the ages of 14 and 25 have played football in sessions which run for 30 weeks of the year. The Female Football Development scheme is run by the Football League clubs as part of the FA Women’s and Girls’ Programme, which is funded by the National Lottery from Sport England.

The coach of a local female grassroots team said ‘“Accrington Stanley have been very supportive in cases such as recruitment. We have had contact from girls involved in this programme who are now interested in joining our football team. We hope to stay in contact and continue this in the future.”

Mike Evans, general manager of the Football League Trust, said: “Football clubs are at the heart of their communities and have an emotional pull that enables them to reach a vast amount of people. Our network of league clubs means we can access and influence communities all around the country and we aim to use this power to make a positive difference to people’s lives.  This as well as developing a strong partnership with the County FAs has enabled us to provide ‘fun and fitness’ to close to 15,000 women and girls in the first year of the programme.”

The programme is part of the FA’s wider strategy on growing participation figures for women’s football and its vision to be the 2nd largest team sport after men’s football by 2018. The initiative was created when The FA, Sport England, the Premier League and the Football League Trust joined forces to provide new grassroots football sessions.  The target is that by August 2015, 40,000 females will have participated in football through the scheme.

It is the first time all four bodies have worked together on a project such as this.
Kelly Simmons, FA director of national game and women’s football, said: “Working alongside our partner organisations to deliver such excellent results demonstrates just what potential there is for women’s football in this country, at both grassroots and elite levels. One of our biggest challenges, apart from attracting new players, is retention, so programmes like this which run for long periods of time, will certainly help us tackle that and help women’s football to become the second most-played sport in the country.”

Jennie Price, Sport England Chief Executive, said: “It is great to see so many women and girls taking up the opportunity to play football thanks to this programme.

“Getting women and girls active is really important to us. We know women play less sport than men but most would like to do more. In fact, almost 120,000 women tell us that they want to play football. But the opportunities have to be right for those women to turn ambition into a reality.”

Minister for Sport Helen Grant said: “It’s great news that more girls and women are getting into football at a time when so much effort is going in to strengthen and raise the profile of women’s sport generally.”

For more information about the programmes, please visit http://www.football-league.co.uk/page/ffd