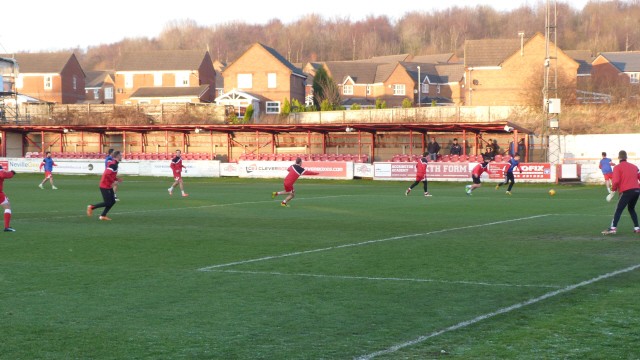 John Coleman admitted the postponement of this afternoon’s clash with Burton could hit Stanley hard in the pocket.

Referee Mark Brown inspected the pitch for more than 30 minutes before eventually deeming two parts of it unplayable and dangerous and called the game off.

Promotion-chasing Burton had just arrived at the Store First Stadium and the referee talked to both managers, Coleman and Jimmy Floyd Hasselbaink , before eventually signalling the game couldn’t go ahead.

Coleman’s players did take to the pitch – playing a practise 11-a-side as they now prepare for their next game at Exeter on Saturday.

The Stanley boss said: “He (the referee) thought the pitch was 95 per cent playable and five per cent where he didn’t think it was right.

“The pitch has got to be 100 per cent playable to play and he feared for player safety. It’s his call not my call and I have to accept it.

“I, though, wouldn’t be playing a practise game now if I thought the players were in danger so draw your own conclusions from that.”

While his players could take their frustrations out in training, the club would be hit financially by the postponement of a home clash against one of the automatic promotion favourites.

Coleman said: “I feel frustrated for the people who have to pay the wages at the end of the month and lose an influx of money which they haven’t budgeted for so that’s going to be difficult for them.

“A club of our stature can’t afford to lose five or six thousand pounds.  In terms of a cash flow point of view it makes it very difficult.”