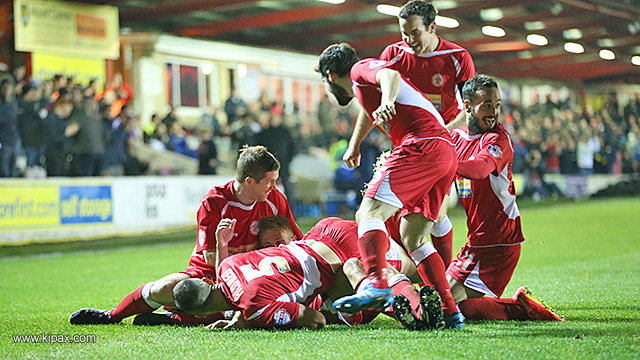 Marcus Carver hit the winner as Accrington Stanley came from behind to beat Notts County 2-1 in the FA Cup.

Ronan Murray had given the League One visitors a 12th-minute lead but skipper Luke Joyce equalised on the stroke of half-time and Carver’s goal early in the second half set up a second round clash at home to Yeovil Town.

John Coleman made four changes to his team from the 1-0 league defeat at Carlisle United with John O’Sullivan and Sean Maguire both ineligible having not been given permission to play in the FA Cup by their parent clubs.

Piero Mingoia and Marcus Carver took their places in the starting line-up with Michael Liddle and Lee Molyneux also replacing Nicky Hunt and Kal Naismith, who both dropped to the bench.

After a cagey first ten minutes, Michael Petrasso had the first chance of the game for the Magpies but he fired over as he ran into the area.

The reprieve was only temporary for Stanley as County striker Murray took advantage of a loose ball in the area to hammer a low shot into the bottom corner, leaving Jack Rose with no chance.

The Reds immediately went on the offensive and Tom Aldred almost equalised but he narrowly avoided making contact on an inswinging Molyneux free-kick at the back post.

Andy Procter was the next to threaten as a smart Mingoia pass sent the midfielder scampering into the area but, under pressure from Taylor McKenzie, rolled his shot past the upright.

Coleman had said before the game that he wanted to see an improvement in his side’s attacking play and he certainly saw that as the chances kept coming for Stanley.

Rob Atkinson’s half volley from 14 yards forced Northern Ireland international Roy Carroll into a good save before Shay McCartan wasted a glorious chance to level the scores, blazing the ball over the bar from six yards out after beating McKenzie to Procter’s cut-back.

The visitors vehemently claimed for a penalty as an Aldred back-pass fell just short of Rose, who went into a challenge with Garry Thompson but referee Eddie Ilderton only gave a corner after consulting his assistant.

After Ronan Murray curled a free-kick over the bar it looked as though Stanley were going to go into the break trailing but the captain stooped low to get the Reds in level terms, meeting McCartan’s cross to power a diving header beyond Carroll for his fourth goal of the season.

Coleman’s men were clearly buoyed by their equalising goal and came out with a renewed urgency in the second half, Procter’s shot deflecting wide off a County defender.

A bout of head tennis from the resulting corner ended with Carver’s shot from the edge of the area looping up into the air and beating Carroll to complete the comeback.

Shaun Derry sent on Jake Cassidy to try and bring his side back into the game and it was a decision which almost paid instant dividends but the striker hit the crossbar with his first touch, racing through to loft the ball over Rose but his effort came back off the woodwork.

Mingoia tried to double the lead with a shot from 20 yards after advancing from midfield but it was collected comfortably by Carroll.

At the other end, McCartan’s foul on Petrasso gave County substitute Liam Noble a sight of goal but his free-kick was wildly off-target.

As the clock ticked into the final five minutes, Garry Thompson headed towards goal but Rose claimed the ball easily on his line. Substitute Cassidy met a Jordan Cranston cross with his head shortly afterwards but could only put his effort over the bar as the Reds held out to seal their place in the second round.