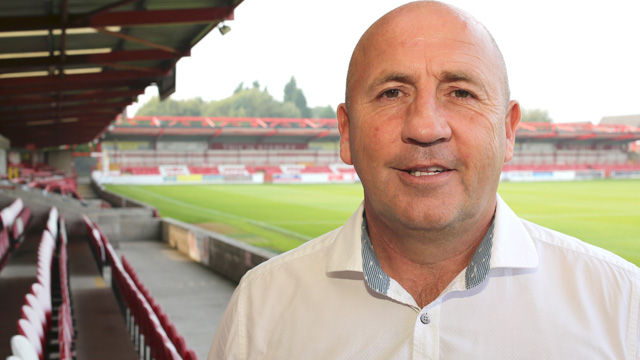 The Stanley boss was forced into four changes for Sunday’s FA Cup draw at Notts County with those given the nod rewarding their selection with good performances.

Now he has to decide who to select at Brunton Park and feels it’s positive to have difficult decisions to make.

“We’ve got a decent squad here and we’re not afraid to use any of them,” he said. “When you get to the stage where your team picks itself through injuries or suspensions or just lack of quality then you’re in trouble.

“I had that problem in my last few weeks at Sligo when we were struggling to get eleven players fit to play.

Nicky Hunt returns from suspension for the game and will be looking to force his way into a defensive unit that kept a clean sheet at Meadow Lane with Michael Liddle selected for the first time since the opening day.

“I’ve got a tough decision on Saturday but I’d sooner have that than trying to get three players into four positions,” explained Coleman. “That shows that we have a bit of strength and we need to have that all over the park.

“Anthony Barry’s resumed training but this week will possibly come too soon for him. With the lads who were ineligible at the weekend coming back in we’ve got real competition. That means we’ll have a couple of lads who won’t even make the bench on Saturday.

“We’ve tried to foster an atmosphere where even if you’re not playing you’re supportive of the team and we’ve got that now. Everyone is pulling in the same direction, everyone wants to do well for the club and their mates to do well.

“We’re not going to become the Brady Bunch overnight but we have quite a tight knit group and that helps when you have to go to the well like we did in the last half an hour against Morecambe.”