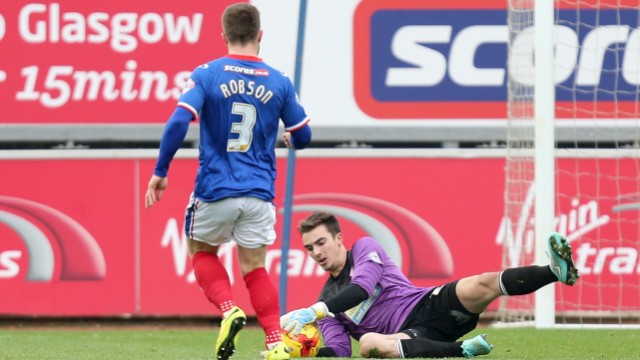 Stanley goalkeeper Jack Rose can’t wait to run out for the first time at the Store First Stadium this evening.

The West Brom loanee is set to make his home debut in tonight’s FA Cup first round replay with Notts County after making to away appearances for the Reds.

“The away support has been great and really impressed me but it’ll be great to walk out in front of the home fans and get the atmosphere,” he said. “I’m sure the fans will get the place rocking. It’ll be an extra incentive for us to do it at home in front of our fans.

“We want to give them something to be pleased about after Saturday and we want them to be able to go into work on Wednesday and tell people that we’re into round two.”

Rose made his debut in the first game at Meadow Lane ten days ago and put aside any nerves to keep a clean sheet in his first match at senior level. He’s not afraid to mix it in the world of men’s football.

“I expect the physical side of things as I’m young,” he continued. “In my debut at Notts County there was a bit of it but I expected to have pressure on me and I expect it again tonight and in the games to come. It’s just what happens.

“It’s been really good (joining Stanley). The lads have been really welcoming and made me feel like part of the team. We had a great result against Notts County but it was disappointing on Saturday (at Carlisle) and a shame that we didn’t get the result we wanted but we have to look forward now.

“It’s a big step from under 21’s for me. It’s competitive and in front of fans every week. It really means something to everyone. It’s a good standard at 21’s level as well but the standard here is good too and I’m really enjoying it.”

The tie must be decided this evening with the winners hosting Yeovil in the second round next month and Rose is keen that the Reds book their place and make up for their weekend defeat.

“It’s great that the game has come around so quickly and we have a chance to put it right straight away. We can’t wait for kick off.